via The Banning-Beaumont Patch thanks to our Friend Jack Cluth 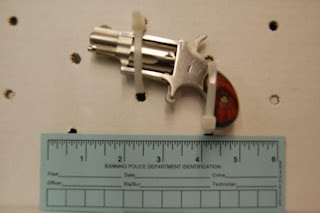 A 12-year-old girl was wounded by a ricocheting bullet Sunday evening in Banning, when her mother fired a tiny pistol she mistook for a cigarette lighter, police said.
Rachel Avila, 30, told police she and her 12-year-old daughter, both of Banning, were talking with friends in front of their mobile home in the 100 block of North Phillips Avenue when Avila found what she thought was a novelty cigarette lighter, police said.

Now wait a minute, did she say "FOUND what she thought was a novelty cigarette lighter?" And that was right in front of their trailer, right? And the police buy that explanation?

The police department advised caution to anyone who finds an object resembling a firearm or a suspicious device.
"Do not handle the object and call local law enforcement for assistance," Banning police said.
Banning police Sgt. Alex Diaz said, "We're tying to find out who the gun belongs to, so we're looking into that. At this point it is considered an accident."

I guess this could be another example of why they oppose registration of guns. One guy called it "plausible deniability." That's cute isn't it?

What's your opinion?.  Please leave a comment.
Posted by Unknown at 7:51 AM