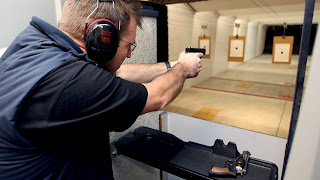 Suicides like the one Sunday at a Fort Myers gun range, while not common, are difficult to prevent, local firearms experts say.

Richard Arlen Kelley, 75, of Fort Myers, committed suicide at Fowler Firearms and Gun Range on Fowler Avenue. He had taken shooting practice for about 20 minutes, a store official said Monday. Josh Hackman, general manager at the Fowler store, said there’s nothing anyone at the store could have done to prevent Kelley from shooting himself.


“He came in, showed his ID, signed the waiver, we showed him how to use the gun, and then he shot for about 20 minutes,” he said. “Then he shot himself. That was it.”

The biased spin job of an article goes on to say "The News-Press archives show at least six other similar suicides at gun ranges around the United States in the past three years." Now, we know that's some shabby archives they've got there. A casual look shows more than that. The Scottsdale Gun Club has had half that themselves, for crying out loud.

No, this problem is a lot more widespread than the pro gun crowd would have us believe.  That's their strategy, to lie about the extent of a problem and then divide by all the guns in the entire country and say the percentage is insignificant. They combine that approach with the one in the article in which they claim nothing can be done about it.  But that's usually self-serving nonsense.

The problem with all their justifications is we're talking about lives, human lives. Renting guns to suicidal people is wrong and every effort should be made to stop it.