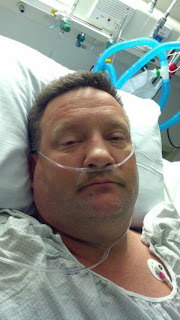 An early morning argument between a Palm Beach Shores man and a woman next door over the small size of his manhood sparked a police shooting that left the man wounded and facing years in prison, Gossip Extra has learned.

Police sources tell me Adam Brown, 45, was swimming naked in the pool of the El Coqui apartment complex about 2:30 a.m. yesterday when a female neighbor started trash-talking about his penis.

“She said something about it being really small,” said one investigator at the scene who asked not to be named. “So, he just got out of the pool, still naked, walked into his apartment and came out with a rifle.”

Brown allegedly knocked on the door of the woman, identified as Jenny Arroway, after she retreated inside. When she opened, the source said he pointed the rifle at her face, then ”he told her: ‘How do you like the size of this?’”

Rarely do we have a news story about gun misuse that actually contains the famous joke.

For me, the emphasis on this story is not the guy's dick size, but the fact that he was another lawful gun owner who resorted to bullying behavior with a gun when pressured.  I suppose the iceberg-theory which they apply to DGUs applies here as well.  95% of these incidents do not get reported.  The ones that make the news are a tiny fraction of what's actually happening.