via Crooks and Liars 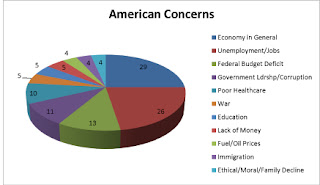 See what's missing? That's right, a lot of things including gun violence. This goes a long way to explaining why the internet presence of gun-control supporters pales in comparison to the gun-rights advocates.

People who own guns and are passionate about them tend to be much more actively involved in the issue than people who don't own guns. It makes sense. And it highlights another oddity about the gun-rights movement.

Gun bloggers have their priorities mixed up. They tend to be one-issue folks who have insufficient concern for all the other important categories in that pie chart. Gun-control supporters on the other hand tend to have more balance and more common sense when prioritizing their concerns.

What's your opinion? Please leave a comment.
Posted by Unknown at 1:01 PM