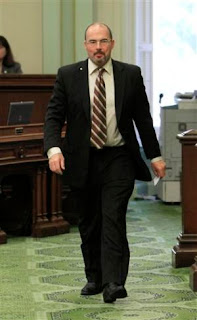 Debate in the Assembly turned personal Monday when Norma Torres, D-Chino, introduced an airport security bill that many interpreted as a jab at Republican Tim Donnelly who was caught bringing a loaded gun through airport security earlier this year.

The bill, which would require law enforcement officers to arrest anyone bringing a concealed gun into an airport, sparked partisan name-calling and accusations of dishonesty.

This bill would certainly create problems for the poor forgetful gun owners who truly have no ill intent. But how could we possibly distinguish them from the others who bring guns to airports with malice?

We can't, the behavior is exactly the same.  That means we would be demanding a higher level of responsibility from people who own guns.  We'd be asking them to know the whereabouts of their weapons at all times.

What's your opinion?  Please leave a comment.
Posted by Unknown at 6:14 AM