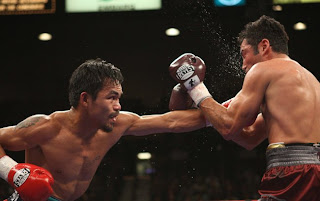 
The Las Vegas Review Journal has the blow by blow description of Manny's 2nd round knockout against the British champ Ricky Hatton on Saturday night.

It was Pacquiao's first time fighting at 140 pounds and the Filipino's fourth straight win in a different weight class, having already posted victories at 130 pounds, 135 and 147.

"I'm surprised this fight was so easy but I worked hard since the beginning of training camp in March," Pacquiao said. "Nothing personal, but this is as big a victory for me as when I beat Oscar De La Hoya."

Now, if you followed all that, you're a bigger fight fan than I am. To make it even more complicated, I read somewhere else that he has 6 world titles in 6 different weight classes. Number 1 in the world is what he is.

This is one of the things I miss about living in Las Vegas.
Posted by Unknown at 1:43 PM