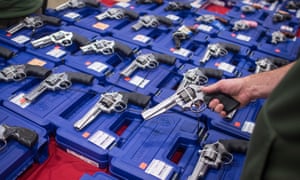 A new home shopping channel will launch in the US early in 2016. It will be called, simply, Gun TV.
Posted by Unknown at 11:28 AM 18 comments: Links to this post

Labels: an armed society is a polite society, guns for everyone 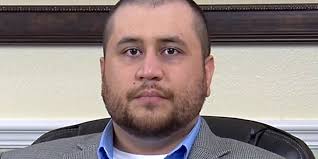 
Though revenge porn is what ultimately did Zimmerman's account in, it's hardly the first reprehensible thing he tweeted. Here are some Zimmerman Twitter low points:
The Time He Re-Tweeted A Photo Of Trayvon Martin’s Body
Zimmerman retweeted a photo showing Trayvon Martin -- the teen whom he shot and killed in 2012 -- lying dead in the grass. The photo was originally posted by Twitter user @SeriousSlav, who included the caption “Z-man is a one man army.”
The Time He Said The Lives Of  ‘Black Slime’ Don’t Matter
The known killer of an unarmed black person tweeted the words “Cops lives matter, black slime doesnt [sic]”
The Time He Called President Barack Obama An “Ignorant Baboon”
Zimmerman tweeted a quote by Obama, in which the president noted that more people die from gun-related threats in the United States than from terrorism. Instead of attributing the quote to Obama, however, Zimmerman cited “Ignorant Baboon.”
The Time He Appeared To Call His Victim, Trayvon Martin, A “Moron”
“We all know how it ended for the last moron that hit me. Give it a whirl cupcake,”Zimmerman wrote in response to a Twitter user who referenced slapping Zimmerman for "Slap-An-Idiot Wednesday."
The Time He Promoted His Confederate Flag Paintings
Zimmerman teamed up with the owner of a self-proclaimed “Muslim-free” gun store in Florida to sell prints of his painting of a Confederate flag in August. On Twitter,he claimed his painting “represents the hypocrisy of political correctness that is plaguing this nation.” Sure, George. That’s what the Confederate flag represents.
Posted by Unknown at 11:07 AM 6 comments: Links to this post

Syed Farook - Gun Nut, Lone-wolf Terrorist Who Got Pissed and Did a Work Place Shooting

Farook has no known criminal record, Burguan said. He was born in Chicago to a Pakistani family, raised in Southern California and worked at San Bernardino County's Department of Public Health for two stints totaling four years since 2010, according to authorities and acquaintances. The Saudi Embassy said he traveled to Saudi Arabia in the summer of 2014 for nine days.
Posted by Unknown at 11:20 AM 21 comments: Links to this post

Most Gun Owners Are Not Gun Rights Fanatics

Posted by Unknown at 9:11 AM 3 comments: Links to this post


Heavily armed attackers terrorized this city on Wednesday, killing at least 14 people and wounding at least 17 at a social services center before leading the police on a manhunt culminating in a shootout that left two suspects dead and a possible third in custody.
Panic, chaos and rumor gripped this largely working-class community about 60 miles east of Los Angeles as the attackers carried out the nation’s worst mass shooting since the assault on an elementary school in Newtown, Conn., nearly three years ago.

The shooting began around 11 a.m. at the Inland Regional Center, which provides services to the disabled, inside a building that was being used by the county health department for a holiday party. While shots rang out, others in the building cowered and hid, sending out texts. Chief Jarrod Burguan of the San Bernardino police said that most of the victims were found in one part of that building. He said the attackers also left an object that “is believed to be potentially an explosive device.”
Posted by Unknown at 8:06 AM 22 comments: Links to this post

Too Many to Choose From

Posted by Unknown at 8:11 AM 18 comments: Links to this post

Link
While pro-gun activists have given Obama some tongue-in-cheek gratitude for these increases, the NRA recently found something for which it feels the administration deserves legitimate credit. In a recent statement, the lobbying group thanked Obama for signing into law the National Defense Authorization Act, complete with “several NRA-backed provisions.”

Among them, the press release revealed, are “expanding gun rights on stateside military bases; prohibiting the Environmental Protection Agency … from banning traditional ammunition; and saving taxpayer dollars by allowing gun collectors to buy vintage military surplus pistols.”
NRA Institute for Legislative Action Executive Director Chris W. Cox expounded on one provision, made especially relevant after four Marines were killed in an attack on two military recruitment stations in Tennessee this past summer.
“The brave men and women in our Armed Forces should not be left defenseless against terrorists on American soil,” he said. “Local commanders now have the authority to allow service men and women to be armed while on base. Members of the military should have the same ability to defend themselves as every other law-abiding citizen.”
Posted by Unknown at 10:11 AM 11 comments: Links to this post


A federal court dismissed a discrimination suit against a Florida gun store that declared itself a “Muslim free zone.”
U.S. District Judge Beth Bloom dismissed the case on jurisdictional grounds, stating that the Islamic group that filed suit failed to provide evidence to support a claim of harm or future harm, according to the ruling filed Nov. 23. The judge also agreed that the store’s statements are protected under the First Amendment.
The judge dismissed both the lawsuit and the complaint by the Council on American-Islamic Relations-Florida, but the group has 30 days to appeal the ruling.
Posted by Unknown at 10:00 AM 12 comments: Links to this post Applying the Second Amendment to knives as arms and the groundbreaking Heller U.S. Supreme Court decision, the Wisconsin Court of Appeals reversed a lower court decision that it was illegal for someone to possess a switchblade (automatic) knife in their home.


The court concluded that the Second Amendment protects knives as well as guns, one of Knife Rights’ foundational principles.

As such, this decision, albeit narrow as was required by Wisconsin law, held that at least with regards to switchblades at home, Wisconsin’s ban is unconstitutional. Knife Rights believes such bans are entirely unconstitutional. Having said that, Knife Rights Wisconsin Knife Law Reform bill, AB 142 would remove this prohibition altogether, as well as enact Knife Law Preemption, resolving the issue entirely. AB 142 has passed the House and awaits a vote in the Senate.

The case arose when Cory Herrmann, the defendant, was injured in his home. Showing his switchblade knife to a friend, Herrmann dropped the knife and cut his femoral artery. After 911 was called, officers responding to the scene seized the switchblade and subsequently Herrmann was charged with illegal possession.

Posted by Unknown at 5:49 PM 4 comments: Links to this post

Labels: you can't make this shit up

A dispute over a parking spot ended with one man being shot Sunday afternoon.

Just after 3 p.m. police were called to Elvira and Trinity streets on San Antonio’s Westside.

Police say the victim and suspect began arguing when the suspect, a 74-year-old disabled veteran, pulled out a semi-automatic pistol and shot the victim in the head.

The victim was taken to University Hospital in serious condition.
Posted by Unknown at 5:39 PM 1 comment: Links to this post

Posted by Unknown at 5:35 PM 11 comments: Links to this post

State Sen. Rebekah Warren, D-Ann Arbor, says she has a fix for Michigan’s stand your ground law that involves scrubbing it from the books altogether. (Photo: Michigan Senate Dems)


The measure would scrap the 2006 Self Defense Act that passed with significant bipartisan support and was signed by then-Gov. Jennifer Granholm, a Democrat who had before served as the state’s attorney general. It extended legal protections to those who use deadly force when threatened by death or severe injury without having an obligation to retreat if possible.
This facet, commonly termed stand your ground, now contend lawmakers, is dangerous.
“Emergency room physicians and folks are just honestly worried about the prevalence of gun violence in our communities and frankly pretty nervous about the fact that there is no duty to retreat and substantial immunity from both criminal and civil liability under these statutes,”argues state Sen. Rebekah Warren, D-Ann Arbor, sponsor of the proposal to repeal the law.
Three other Democrats, including Senate Democratic Leader Jim Ananich, have signed on as co-sponsors of the legislation, for which Warren cites high profile court cases such as that of George Zimmerman and Trayvon Martin in Florida, as an example of why Michigan needs to rethink stand your ground.
“People are using this lack of duty to retreat as a reason to inflict harm and are sometimes not held liable for taking someone’s life. And I want to set that right in Michigan,” she said.
Her legislation, SB 611, was introduced earlier this month and, framed as a simple two-page repealer, would scrub the 2006 Self Defense Act from the state’s laws. Castle Doctrine, which allows for defense inside the home against an aggressor there illegally, would remain in place.
Stand your ground in Michigan withstood a 2012 repeal attempt in the state House by urban Democrats from the Detroit area while over 20 states have enacted similar laws in the decade since Florida’s model law was adopted.
Posted by Unknown at 11:24 AM 5 comments: Links to this post