America's fierce debate over gun control usually takes place against the backdrop of the second amendment of the US constitution - seen as enshrining the rights of all citizens to bear arms.

Now a different precedent is being cited by advocates of tougher restrictions - a 700-year-old English law dating back to before guns had even been seen in Britain.

Lawyers fighting a challenge to limitations on who is allowed to carry concealed weapons on the streets of Washington will point to a law passed in 1328 during the reign of King Edward III when the case comes before a federal appeals court on Friday.

The law strengthened a statute passed more than 40 years earlier making it a crime "to be found going or wandering about the Streets of [London], after Curfew…with Sword or Buckler, or other Arms for doing Mischief".
Posted by Unknown at 9:32 AM 3 comments: Links to this post

An attorney representing a California FFL holder whose extensive firearm collection was seized in dramatic fashion by authorities is claiming his rights have been violated.

The Clovis area man, Albert Sheakalee, 59, went through mental health treatment last summer, which, unknown to him, landed him in the California Department of Justice’s Armed Prohibited Persons System (APPS) database. This, as touted in a press release Wednesday by state Atty. Gen. Kamala Harris, barred him from firearms ownership and triggered a 12-hour raid on his home from Bureau of Firearms Special Agents on Nov. 12, which ended in his arrest for possessing illegal firearms.

Posted by Unknown at 4:59 PM 22 comments: Links to this post

Most Over-the-Top Smears of NRA Gun Owners in 2015

Link to the others

The New York Daily News ran a cover photo on an estimated 2,000 firearms purchased by individuals on the TSA’s no fly list over the course of eleven years.
To illustrate its point, this was their front page:

Image Credit: Twitter
So, there are just eight examples of insults and attacks on the NRA and its more than 5 million members. There are likely to be more in the future.
Posted by Unknown at 9:50 AM 8 comments: Links to this post

Washington, D.C. — A new national Public Policy Polling survey of gun owners finds overwhelming support for background checks and a higher likelihood of supporting political candidates who move them forward. Gun owners also believe the National Rifle Association, or NRA, is out of touch with them on these issues, and many believe the organization has lost its way altogether. While the debate over gun policy starkly divides American politics, this poll shows that support for key gun violence prevention policies has remained strong for years, even among gun owners themselves.
Posted by Unknown at 7:31 AM 9 comments: Links to this post It will prevent CW license holders from being charged with the crime of violating the “Open Carry” law because a concealed firearm, being legally carried, accidentally or inadvertently becomes visible to the sight of another person.


ANYTIME YOU CARRY CONCEALED, YOU ARE IN DANGER OF BEING ARRESTED, CHARGED AND PROSECUTED LIKE A CRIMINAL for violating the ban on open carry of firearms, if your gun is accidentally, unintentionally, briefly exposed to the sight of another person.

Our attorneys tell us that the ONLY WAY to completely stop this abuse is to legally allow license holders to carry openly — then they cannot be charged with violation of the open carry ban no matter how brief the accidental and unintentional exposure.

Posted by Unknown at 7:21 AM 16 comments: Links to this post

The Original Reason the NRA Was Founded

A Union infantryman in uniform, carrying a large rifle and bayonet, during the U.S. Civil War


Today and for the last fifty years or so, the National Rifle Association has been a powerful political group best known for its staunch defense of Americans’ rights to bear arms. When it was granted a charter by New York State on this day—Nov. 17—in 1871, it had a very particular reason for coming into being.

As TIME’s Richard Lacayo explained in a 1990 feature about the group, “The N.R.A. was founded in 1871 by a group of former Union Army officers dismayed that so many Northern soldiers, often poorly trained, had been scarcely capable of using their weapons.”

The original call for the organization of such a group came from an article by Col. William C. Church in an August 1871 issue of the Army and Navy Journal. In it, he cited the success of Britain’s National Rifle Association and its—confusingly named, at least to modern readers—Wimbledon riflery tournament range: though he had originally believed that the National Guard ought to organize such a club, he would turn to private enterprise for speed’s sake.

“An association should be organized in this city [New York] to promote and encourage rifle-shooting on a scientific basis. The National Guard is to-day too slow in getting about this reform,” Church wrote. “Private enterprise must take up the matter and push it into life…

The subject has already been presented to several enterprising officers and ex-officers of the National Guard, and they have been found enthusiastic in the matter. It only requires hearty co-operation and an actual start to make the enterprise successful.”
Posted by Unknown at 2:56 PM 12 comments: Links to this post

QUESTION: “If a national pollster asked you if you owned a firearm, would you determine to tell him or her the truth or would you feel it was none of their business?”

Gallup recently released a poll showing that gun ownership had declined from polls they had taken in an earlier time period. That number is inconsistent with the number of firearms that have been sold since President Obama took residency, but the difference can be answered by the Zogby Analytic question above. The poll indicates maintaining anonymity is a contributing factor

Posted by Unknown at 7:06 AM 17 comments: Links to this post

The two measures, introduced in September, would end the curious practice that permit holders could only carry in these designated pistol free zones if their weapon was visible and replace it with one in which CPL holders could apply for an exemption to the zones themselves. The bill passed the Senate Judiciary Committee in a 4-1 Republican-heavy vote last month.

Snyder, who vetoed a similar bill in 2012, this week told radio talk show host Steve Gruber, “I stand by that decision,” and affirmed when pressed that he would veto the latest attempt to expand legal concealed carry into gun free zones saying, “I’ve done it before.”

Snyder contends that unless a proposal allows for local control over gun free zones, he would be against it.

Gun control groups such as the Coalition to Stop Gun Violence acclaimed word of Snyder’s promised veto, calling it “great news.”
Posted by Unknown at 9:33 AM 2 comments: Links to this post

Trump on the Paris Tragedy

Later on MSNBC's "Morning Joe," Trump wondered why the U.S. had not bombed the oil targets before Friday's attacks. "Why is it that we take them out now after this vicious and violent attack?" he asked, also vowing to "obliterate their source of wealth" and to "attack the banking system because they’re getting tremendous amounts of funds through a very complex network of banking and banking systems."


Wrong on the first, right on the second.
Posted by Unknown at 7:28 AM 13 comments: Links to this post

How Gun Traffickers Get Around State Gun Laws 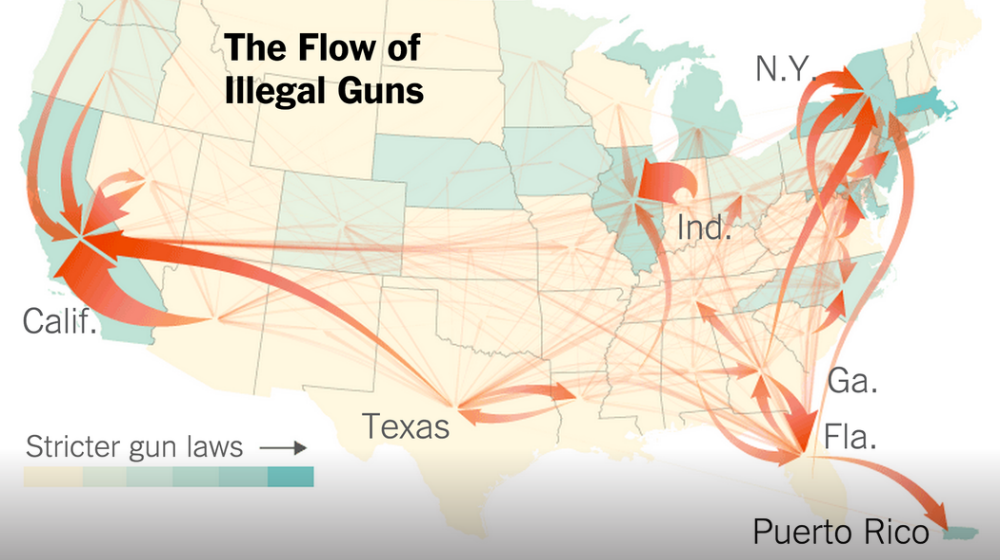 In California, some gun smugglers use FedEx. In Chicago, smugglers drive just across the state line into Indiana, buy a gun and drive back. In Orlando, Fla., smugglers have been known to fill a $500 car with guns and send it on a ship to crime rings in Puerto Rico.

In response to mass shootings in the last few years, more than 20 states, including some of the nation’s biggest, have passed new laws restricting how people can buy and carry guns. Yet the effect of those laws has been significantly diluted by a thriving underground market for firearms brought from states with few restrictions.

In New York and New Jersey, which have some of the strictest laws in the country, more than two-thirds of guns tied to criminal activity were traced to out-of-state purchases in 2014. Many were brought in via the so-called Iron Pipeline, made up of Interstate 95 and its tributary highways, from Southern states with weaker gun laws, like Virginia, Georgia and Florida.
Posted by Unknown at 7:31 AM 17 comments: Links to this post

OK. I was just informed that my sister wants her first handgun and that she intends it for concealed carry. (She already took the class and got the permit.) Apparently she has the plan that she can just keep it in her purse, an idea that sends me right over the edge, as an effective self-defense handgun has to be kept absolutely secure and instantly accessible, and a purse, in my mind, is neither. I may be swayed regarding some of these new "concealed carry purses" but haven't made up my mind yet.
She also doesn't know what she wants yet, and I'm too far away from her to take her shopping at a few gun stores to get a feel for what fits her best.
So this being the case, I'm putting out a call to every red-blooded American woman who carries a firearm for personal protection. Please reply via post and tell us what you carry and how you carry it. I know what works for me--big gun with big bullets in a leather OWB holster--but her needs and shape are different.
Posted by Unknown at 6:59 AM 5 comments: Links to this post

Posted by Unknown at 12:03 PM No comments: Links to this post