Derek Ty Poe, 26, was arrested Aug. 10 on a felony domestic violence charge after his live-in girlfriend accused Poe of grabbing her throat with both hands and head-butting her, according to public records. Poe in 2013 was arrested on a misdemeanor charge after he walked through Parkdale Mall with an assault rifle strapped across his back. Photo: Hardin County Jail

Local news report
Posted by Unknown at 11:30 AM 14 comments: 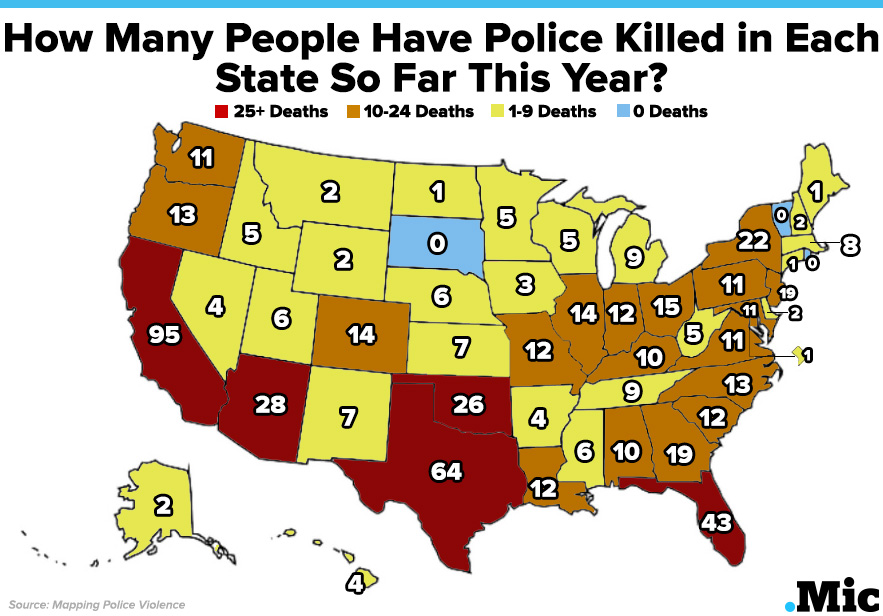 
Just three states (Rhode Island, South Dakota and Vermont) avoided any killings at all. Meanwhile, California reached a shocking 95 police killings, Texas clocked 64 and Florida was not far behind with 43. Arizona and Oklahoma are runners-up at 28 and 26, respectively.
Keep in mind the year is only halfway over. Even the 605 killings that Mapping Police Violence tracked through July 10 alone would make the U.S. an outlier among comparable democracies.
This doesn't happen in other developed countries: Policing in the U.S. is controlled largely at the state and local levels, meaning that training, equipment and use-of-force standards vary wildly. But compared to many other countries, American police enjoy relatively lax guidelines on when and how they can use lethal force.
According to the Washington Post, in Britain, Iceland, Ireland, New Zealand and Norway, most police tend not to carry firearms at all while on duty. German police are extensively trained to understand that drawing and firing their weapons is a very serious matter of last resort.
On the other hand, an Amnesty International analysis found laws regulating when and why police are allowed to kill someone in each of the 50 U.S. states fall far short of international standards. In a statement on Amnesty's website, executive director Steven W. Hawkins said, "The fact that absolutely no U.S. state laws conform to this standard is deeply disturbing and raises serious human rights concerns. Reform is needed and it is needed immediately. Lives are at stake."
Posted by Unknown at 11:11 AM 8 comments:


Police officers working in states with higher rates of private gun ownership are significantly more likely to be killed on the job than officers working in states with low levels of gun ownership, according to a new study on occupational homicides.
The study, published by the American Journal of Public Health on Thursday, analyzed FBI data focusing on the number of law enforcement officials that were killed between 1996 to 2010. During that period, 716 out of the total 782 police killings were found to be carried out by the use of firearms. Handguns were responsible for 515 of all the homicides.
"If we're interested in protecting police officers, we need to look at what’s killing them, and what's killing them is guns,” the study's lead author David Swedler of the University of Illinois at Chicago School of Public Health noted in an academic news release.
A firearm present in a domestic violence situation also increases the likelihood of an officer being killed.
Alabama, Alaska, Arkansas, Mississippi, and Montana recorded both the highest levels of gun ownership and police killings. Connecticut, Massachusetts, New Jersey, New York, and Rhode Island had the lowest levels for both.
Posted by Unknown at 11:00 AM 8 comments:


Peachtree City’s former police chief pleaded guilty Thursday afternoon to accidentally shooting and paralyzing his wife on New Year’s Day.
A Fayette County judge sentenced William McCollom to 12 months’ probation and fined him $1000 as a first offender.
Fayette County prosecutors charged McCollom with a misdemeanor count of reckless conduct after they determined the chief did not intentionally shoot his wife Margaret.
The shooting took place in the early morning hours of January 1st at the couple’s home.
Investigators determined McCollom fired his service weapon as the couple was in bed, striking his wife in her back.
A Fayette County Grand Jury indicted McCollom on the misdemeanor charge in May.
In March, McCollom resigned as Peachtree City’s Police Chief.
Posted by Unknown at 2:01 PM 13 comments:

Labels: slap on the wrist, special treatment for this guy

Was the Civil War About Slavery?

Oregon is the Eighth State to Adopt Expanded Background Checks

The bill that is now law, SB 941, requires that all private gun sales take place through licensed firearms dealers who would perform background checks. There are some narrow exceptions for family transfers, loans at shooting ranges, law enforcement, and – in some cases – inherited firearms, but disregarding these, all others must go through a dealer.
Further, state law requires that the thumbprints of the purchaser be kept on file with the dealer for at least five years following the transfer, and be made available to law enforcement upon request.
Those who conduct a transfer without a background check and federal paperwork would risk a Class A misdemeanor for their first offense, which could lead to up to a year in jail and fines of up to $6,250. Subsequent violations would be a felony that could earn the violator up to five years in state prison.
Posted by Unknown at 1:04 PM 26 comments:

Local news
Since Jan.1, 2014, the Flagler County Sheriff’s Office stated in a release issued today, 34 firearms were stolen from vehicles in the county. Of those, only seven have been recovered. The value of the guns stolen has been estimated to be more than $16,500. (An earlier version of this story incorrectly reported the time span as starting in 2015 rather than 2014.)
“More guns in the hands of criminals means more innocent people may be victimized,” Sheriff Jim Manfre said in the release. “It also places our law enforcement officers at a greater risk.”
The majority of car break-ins in Flagler County are crimes of opportunity: car owners leave their vehicles unlocked. Only a minority of break-ins involve the shattering of door windows or other violent means of gaining access. Most of the break-ins take place in residents’ driveways or in commonly used parking lots.
The sheriff’s office again reminded residents today to take the extra time to lock their vehicles, place valuables out of sight and remove weapons when the vehicle is left unattended for an extended period of time. Florida law, however, is weak regarding the safe storage of weapons.  The law requires that a loaded firearm be kept in a lockbox or secured with a trigger lock, but only if the gun owner “reasonably” knows that a minor could gain access to the weapon. The law makes exceptions if the gun owner is carrying the weapon, and is vague about vehicles, as it provides that the gun owner may keep the gun “within such close proximity” that he or she “can retrieve and use it as easily and quickly as if he or she carried it on his or her body.”
The penalty for violating the law is also weak: it’s a second-degree misdemeanor, but only if a minor not only gets hold of the weapon, but goes on to exhibit it in a public place or to use it in a threatening way.
Posted by Unknown at 12:43 PM 4 comments:

Walnut Creek police have revealed that the killer used a homemade "ghost gun" in the murder-suicide of two young college students. It was a crime and a weapon that's really surprised police.In late July, police say 21-year-old Scott Bertics showed up at a house in Walnut Creek and shot and killed 19-year-old Clare Orton before using a second gun to kill himself. While both had been in a relationship, police are not saying what prompted the young man to commit this crime.But police told ABC7 News that both handguns were homemade, built by the Bertics who ordered the parts through the mail.

A new study from Princeton spells bad news for American democracy—namely, that it no longer exists.
Asking "[w]ho really rules?" researchers Martin Gilens and Benjamin I. Page argue that over the past few decades America's political system has slowly transformed from a democracy into an oligarchy, where wealthy elites wield most power.

Using data drawn from over 1,800 different policy initiatives from 1981 to 2002, the two conclude that rich, well-connected individuals on the political scene now steer the direction of the country, regardless of or even against the will of the majority of voters.

"The central point that emerges from our research is that economic elites and organized groups representing business interests have substantial independent impacts on U.S. government policy," they write, "while mass-based interest groups and average citizens have little or no independent influence."
Posted by Unknown at 10:05 AM 7 comments:

James Holmes Sentenced To Life In Prison Without Parole

Labels: what about Hinkley?

In 60 days, there will be no such thing as a legally grandfathered civilian-owned magazine capable of holding more than 10 rounds in Los Angeles.
Mayor Eric Garcetti signed the citywide ordinance Friday prohibiting the ownership of what the state deems large-capacity detachable firearm magazines. The controversial measure was introduced by City Councilman Paul Krekorian and passed the council by unanimous vote on July 28.
Krekorian, along with gun control advocates, joined Garcetti at City Hall for the signing ceremony.
“I am committed to reducing the gun violence in our city,” Garcetti said. “This ban is part of that larger effort. It will help keep our streets safer and help prevent the magnitude of mass shootings. We are sending a clear message – we will not wait for Washington to act, we are ready to act now.”
The ordinance, Council File 13-0068, bans the possession of any magazine capable of holding more than 10 cartridges inside the city limits. While state lawmakers enacted a similar prohibition in 1999 during the Federal Assault Weapons Ban, it allowed continued possession of mags already in circulation. The new Los Angeles law removes that protection.
Posted by Unknown at 4:16 PM 13 comments: