What Some Consider to be The Solution 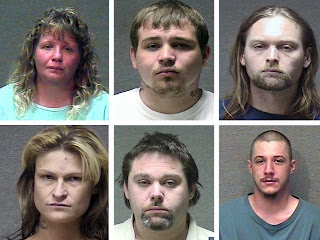 WISH TV reports on the happy ending to a case of gun theft in Indiana.

Muncie police say they've arrested six people and are looking for one more in connection with a massive gun heist last week .

Detective Robert Scaife says several leads took police to the home of one suspect where police found 114 stolen guns in the garage.

One hundred and forty guns and boxes of ammunition were stolen from a retired Ball State custodian who'd been collecting guns for more than 30 years. The victims son told 24-Hour News 8 the stolen guns and ammo are worth around $200,000. His dad stored the guns in dresser drawers, closets and a cedar chest.

The victim's son said he was planning to buy a gun safe following a different burglary attempt in late April. But the suspects broke in again before he had the chance.

The guns were stored "in dresser drawers, closets and a cedar chest." Do I have to say it? The gun owner should forfeit his collection, not to thieves, but to the government as they put his name on the disqualified list. That's one part of the answer.

As to the solution of tracking down thieves, The Muncie, Indiana Police must have used the profiling techniques of Sheriff Joe Arpaio. Just look at those characters' faces. What cop wouldn't recognize them in a heartbeat? Maybe this profiling business isn't so bad after all. Or maybe cops have always done it and always will.