The Guardian in the UK: Anders Breivik, Terrorist

I would argue that the actions by Anders Breivik, whether he was crazy or not, meet the definition of terrorism, because those actions were deliberate uses of violence intended for political change to result from them.

This differs from the many other reasons used to justify mass shootings.  In Seal Beach, California for instance, where there was a smaller mass shooting several months later, which appear to be motivated by anger over a domestic matter, a child custody dispute in a divorce case.  The latter shooting was very personal, and not in any way political, not in any way intended to change public opinion about politics.

The dictionary definition of the word terrorism makes the distinction clear (this definition is from dictionary.com):


ter·ror·ism
noun
1.
the use of violence and threats to intimidate or coerce, especially for political purposes.

Sanity or lack of sanity has no apparent role in that definition; one can be a crazy terrorist or a sane terrorist; it is the focus of why one commits violence that is the defining characteristic.  I can certainly understand why those on the political right would be very uncomfortable at the role their political rhetoric has played in the influencing of a crazy person.  That we would now be seeing a hurried song and dance of 'get off my side'  is not surprising.

But the more significant question is --- why are those views only crazy when Breivik holds them, but the exact same identical political position is NOT crazy when so many of those on the right hold them, notably the rigorously Islamophobic positions expressed by our 2012 GOP presidential candidates?

I would concede that in believing his actions would produce the results he desired, Breivik was more than a little delusional.  But we cannot simply assert that his position of Islamophobia was delusional without tarring a wide swath of the right with that same label of insanity.  It's not insane; it is xenophobic, it is religious and ethnic hatred, but it is not, of itself, mental illness.

Anders Breivik's hatred does not come from a delusional mind

The Norwegian terrorist's political madness, which he shares with other extremists, has been reduced to personal madness 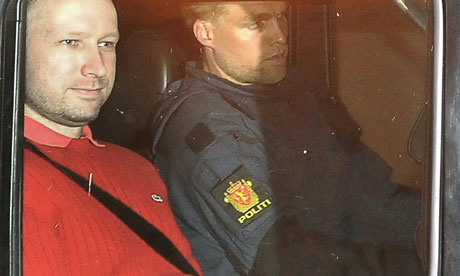 Anders Breivik, left, who killed 77 people in Norway in July has been recently declared insane. Photograph: Jon-Are Berg-Jacobsen/AFP/Getty Images
As the terrorist of Oslo is declared insane, the Norwegian faith in our judicial system is challenged. On Tuesday, psychiatrists came to the conclusion that Anders Breivik was suffering from paranoid schizophrenia when he killed 77 people in Norway this July. The news has come as a shock to many, yet the diagnosis is in many ways a logical consequence of various developments over the last month. What originally seemed to be an obvious case of political terrorism has increasingly been treated as a case of individual madness. After the local elections in September, media coverage and public debate followed two diverging trails. One of these focused criticism not on Breivik or any of his political compatriots on the Islamophobic right, but on local and national police, and the Norwegian political authorities. This approach came to a preliminary conclusion when the minister of justice more or less voluntarily left his position and was applauded by the opposition for "taking responsibility" – as if he, or the government, were primarily to blame for the terror, not the terrorist himself. The second approach, led by the media, has shifted attention from Breivik's political ideas and deeds to his personal psyche. Readers of Norwegian newspapers have delved into his childhood, relation to family, lack of a sexual life and social disorders. Two days before the report from the psychiatric commission was released, Norway's largest newspaper published a full front page story with a picture of a child's bicycle, speculating that Breivik may have been sexually abused in his childhood. The criminal case was turned into psychology even before the psychiatric report was released. And as a consequence, our perspective moved from Utøya, from the acts of terror and the ideas behind them, to Breivik's personal history. His political madness, a political paranoia he shares with extremist bloggers, organisations and politicians all over Europe, has been reduced to clinical madness, now with the medical title "schizophrenic paranoia". It has been claimed that this diagnosis could be used to brand all his fellow extremists insane as well, but I think that this is unlikely. On the contrary, many internet extremists will continue to claim that the madness is exactly what distinguishes them from Breivik. He might share some of their views, but they don't share his diagnosis. As one of the 157 lawyers representing the victims said: "Perhaps it is easier to live knowing that this was just the deed of a sick person." After the second world war, Norwegian society showed a similar response to the Nazi sympathies of Nobel laureate Knut Hamsun. He was declared insane to avoid confronting how deep into society the xenophobic ideology went. I fear that Breivik's diagnosis will serve the same purpose, moving the focus away from the ideas he has spearheaded. These are ideas of which some are echoed in many parts of Norwegian society, and not just on the margins. At the moment, the conclusion of the psychiatric experts has little support among Norwegians. Mainly because it might take away the Norwegian society's need for revenge. The idea that Breivik might not be punished by jail, but "only" detention in a closed hospital ward challenges our idea of justice. His deliberate planning and tedious carrying out of the atrocities challenges our idea of severe mental illness. And perhaps worst of all, the possibility that he might – unlikely as it is – one day be let out on the streets again is an offence to the families and friends of the victims and the survivors, and thus to all of us. I believe that this need for revenge is justified. The murders in Oslo and at Utøya has an evil and political character not seen in Norway since the war, and must be treated as such – as something extraordinary. But in the end I don't think the question of jail, detention or forced psychiatric care will create lasting political disturbance or lack of faith in Norway's judicial system. There seems to be an agreement across political boundaries that the court must rule by its laws, and that this preliminary conclusion will be thoroughly checked. We will accept the verdict as long as it is for life. But if he is ever set free, even just for a short leave, there will be a riot. The diagnosis will be accepted as long as he is locked up for life. The long-term political consequences of the psychiatric report might be more severe. This diagnosis may be the one thing that puts the terror of Oslo in the category of school massacres and Charles Manson, instead of placing it where it belongs – as the last in a long series of violent acts perpetrated by the extreme political right. As most Norwegians, I do not have the medical skills to support or overrule the verdict of a psychiatric commission. Either way, the paranoia and the crimes of Anders Breivik are his own, but his hatred does not come from a delusional mind. We recognise it as the white man's hatred that we have known for a century. His acts of terror mirror the views and expressions of a multitude of rightwing extremists. He is not alone in his madness.