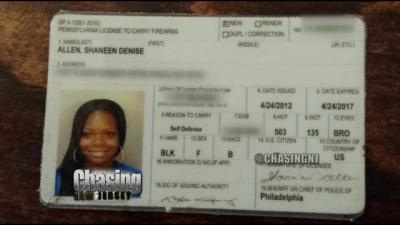 
27 year-old Shaneen Allen wanted to protect her family. She took a gun safety course, applied for and was granted a concealed carry permit and she purchased a gun.

“One of my family members, he thought it was appropriate for me to get one because I’m a single mother and I have two children and I work two jobs and I work late and getting up at that time of night I got robbed twice last year and he felt the need for me to get my license to protect me and my kids,” Allen explained.
However, while Allen, from Philadelphia, was covered to carry a gun in Pennsylvania, she made the mistake of crossing into New Jersey with the weapon and now she's facing a mandatory minimum of three-years in jail.
Allen said that she didn't know her permit didn't apply to New Jersey so when she was stopped for a minor traffic offense she told the police about her gun and her permit to carry. In this case, being honest may have cost her.
“The judge tried to tell me that telling the truth messed me up, my life up and the cop said the same thing. Me opening my mouth and speaking out he said I’m one out of ten people that spoke up and was honest and that got me in trouble,” she said.
"she made the mistake of crossing into New Jersey with the weapon," but that wasn't her real mistake. Her real mistake was to ignore the law and figure she wouldn't get caught.  Her second mistake was to pretend she was ignorant of the law, something that is hardly credible.
"I’m one out of ten people that spoke up and was honest and that got me in trouble.” What a crock.  Typical of gun owners who think they can get away with disobeying "bad laws," she's blaming anything but herself. If she were truly innocent and truly law-abiding she would simply admit that she should have known better.  Instead her story is a bizarre attempt at crying ignorance and selling herself as a single mom, an honest gun owner, a poor victim of overly strict NJ laws.
In spite of my total lack of sympathy for the tricky Ms. Allen, I don't think for a moment she deserves to go to jail, nor do I think she will.  The gun rights fanatics come up with a case like this every year or two and try their best to make these people into poster-child heroes for gun rights. It's nonsense.
What should happen is someone who breaks these laws should lose their right to own and use guns. People who feel they can get away with breaking laws like this, are in the habit of breaking other laws they disagree with or find too inconvenient to obey. Or, giving them the benefit of the doubt and accepting their ignorance story, they are too stupid to even know what laws they need to follow, which makes it impossible for them to be law-abiding.
One strike you're out saves lives.