As proof that gun availability has a major impact on gun violence, I offer this: 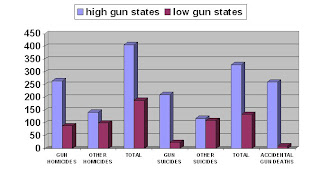 The chart above covers the statistics of children's deaths from firearms, the children being from age five to fourteen, the time period covered 1991 to 2000.

The States designated "low gun" are five with a total population of 26.2 million, as follows: Hawaii, Massachusetts, Rhode Island, New Jersey and Connecticut.

What's your opinion? Do you find the data compelling, as evidence that gun availability increases gun violence? Do you think all of it is negligible, given the tremendous proliferation of guns in America? If you think that, please remember, this chart only covers kids who died. There are also stats on babies under five, there are adult women and men, there are numerous less-than-fatal shootings, some of which leave people permanently disabled.

Please feel free to leave a comment.
Posted by Unknown at 7:13 AM