Utah Hunter Lucky to be Alive 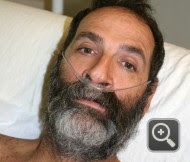 From his bed at McKay-Dee Hospital, Jonathon Pettit issued an emotional written statement Tuesday saying divine intervention saved him after an accidental shooting on the opening day of the state’s rifle deer season.

“There is no doubt in my mind that I was protected,” Pettit, a 53-year-old Roy resident, said in the statement recounting his harrowing tale of survival. “The gunshot should have killed me. I am so grateful that I found the strength to survive.”

Pettit was hunting Saturday in a remote area near Snowville between Kelton and Locomotive Springs and had just removed his antique .36-caliber Navy muzzleloader pistol from his truck when the gun discharged.

“I had my gun in my hand and lifted my tailgate,” he wrote. “The force of closing the tailgate discharged the pistol. It (the bullet) entered my right side and traveled up my body and lodged on my back bone.”

Divine intervention, was it? Too bad god didn't help him with Rule number 2. That would have been even better.

Here's the really interesting part of the story.

So, that one single county in Utah which allows hunting has one accidental self-inflicted gun shot incident every year. Does that mean they also have some shootings in which one hunter wounds or kills another? Would the same be true of the other counties in Utah and all the other states that have hunting.

And that would be only the hunting accidents.  We see far more domestic gun accidents in the news.

How does all this reconcile with the statistics we keep hearing from the pro-gun crowd which supposedly prove how rare accidental shootings are?  It doesn't.  It doesn't reconcile. Regardless of whether the information comes from the FBI or the CDC or from god himself through divine intervention, when it doesn't make sense, when it doesn't add up, there must be some other explanation.

There are more accidental shootings than anyone on the pro-gun side likes to admit.

Isn't it possible that the most bona fide statistics suffer from improper reporting?