Derek Carlile Gets a Mistrial 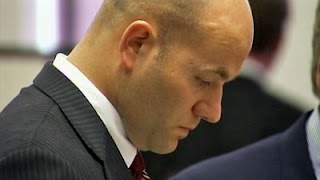 Derek Carlile's daughter Jenna was killed after he left a gun unsecured in the family's van while Carlile and his wife were out of the vehicle. His 3-year-old son got ahold of the weapon that went off, shooting Jenna in the stomach.  She later died at a hospital.

The jury told the judge that after several votes, it was deadlocked.  The judge questioned jurors, and declared a mistrial Tuesday afternoon.

Prosecutors said the little boy, who was used to playing with toy guns, saw Carlile's loaded .38-caliber service revolver, that the gun could have been put in a lockable storage box and that its safety lock was not engaged.

Carlile's attorney said the officer meant to put the off-duty weapon on his ankle, but simply got distracted and never meant to leave his children in danger.

That's as good as a not-guilty. Gun negligence is not taken seriously enough unless someone is killed. In those cases, especially if it's the gun owner's kid, the pity factor gets them a pass. How could a jury be deadlocked in a open-and-shut case like this otherwise.  They felt sorry for the guy.

A man who does something like this should never have another chance to misuse his gun rights. I don't see much good in putting him in jail, but the loss of gun rights should be a given.

What's your opinion?  Please leave a comment.
Posted by Unknown at 7:50 AM