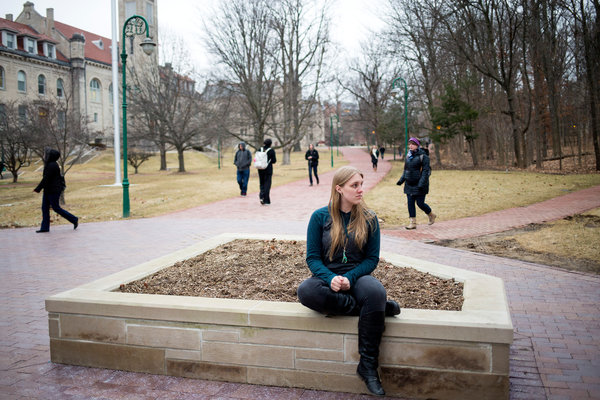 Crayle Vanest, an Indiana University senior, recently became the first woman on the board of Students for Concealed Carry. Credit Aaron P. Bernstein for The New York Times

Support for so-called campus carry laws had been hard to muster despite efforts by proponents to argue that armed students and faculty members could prevent mass shootings like the one at Virginia Tech in 2007. The carrying of concealed firearms on college campuses is banned in 41 states by law or by university policy. Carrying guns openly is generally not permitted.

But this year, lawmakers in 10 states who are pushing bills that would permit the carrying of firearms on campus are hoping that the national spotlight on sexual assault will help them win passage of their measures.

“If you’ve got a person that’s raped because you wouldn’t let them carry a firearm to defend themselves, I think you’re responsible,” State Representative Dennis K. Baxley of Florida said during debate in a House subcommittee last month. The bill passed.
Posted by Unknown at 7:27 AM