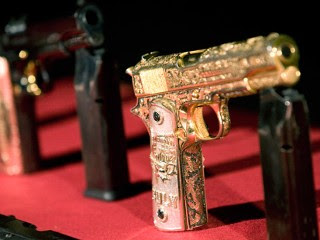 
ABC reports on the percentage of guns used in the Mexican Drug Wars which are estimated to have come from the U.S.

A shocking new report obtained by ABC News says that as many as three out of four guns used in crimes in Mexico can be traced to gun stores just across the border in the U.S. The numbers bolster complaints by Mexican officials that the country's unprecedented bloodshed – 28,000 people have died in drug-cartel violence since 2006 – is being fueled both by the U.S. appetite for drugs, and by American weapons.

I don't know what's new or shocking about that, in fact they used to say 90%, so I guess if they wanted to they could spin this as progress.

Getting away from the percentage for a moment, what do you think about the idea that the bloodshed in Mexico "is being fueled both by the U.S. appetite for drugs, and by American weapons?" Isn't that a fair way to say it?

Please leave a comment.
Posted by Unknown at 7:54 AM