Accidental Shooting of Brother while Shooting Pigs in California - No Charges 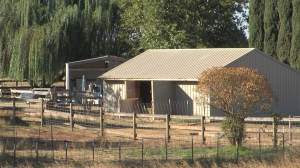 The accidental shooting happened around 6:24 a.m. Saturday near Kinder Lane and Calvine Road during a family event.

Apparently, when trying to put down a pig for the event, the pig jerked after being shot and caused the rife to slide backwards and go off a second time.

The 27-year-old was hit in the face and was sent to the hospital in critical condition. The gun is said to be a .22 caliber rifle.

About a dozen people were at the event and saw the shooting.

I guess these are not your slick Los Angeles types or your urbane San Francisco residents.  No, these are more like California rednecks, rural people who think a good family event starts out with shootin' some hogs.

The only problem is some of them are unfit to handle guns.

What's your opinion?  Why was no one arrested?  Is this different from the Des Moines story? In this one the "pig jerked" and the rifle slid backwards and went off, in the Iowa case the shooter "thought the gun was unloaded" and shot his friend. Are these different kinds of accidents? Do they deserve different kinds of legal responses?

What do you think?  Please leave a comment.
Posted by Unknown at 8:38 AM