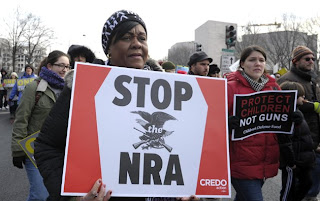 Thousands of people, many holding signs with names of gun violence victims and messages such as "Ban Assault Weapons Now," joined a rally for gun control on Saturday, marching from the Capitol to the Washington Monument.


Leading the crowd were marchers with "We Are Sandy Hook" signs, paying tribute to victims of the December school shooting in Newtown, Conn. Washington Mayor Vincent Gray and other city officials marched alongside them. The crowd stretched for at least two blocks along Constitution Avenue.