Change it to Muslim and see what their reaction is...

Funny, but if you changed the word "Christian" to "Muslim" in some right wing screeds, that you would see people going apoplectic.  Strange, but they just don't quite get what that means.

Anywaly, I'd prefer to live in Europe where this shit isn't tolerated than in someplace that fancies itself as Iran or Afghanistan or some other Islamic terror land only rebranded "Christian".

Sorry, but the only difference is that the one on the left isn't as modestly dressed. 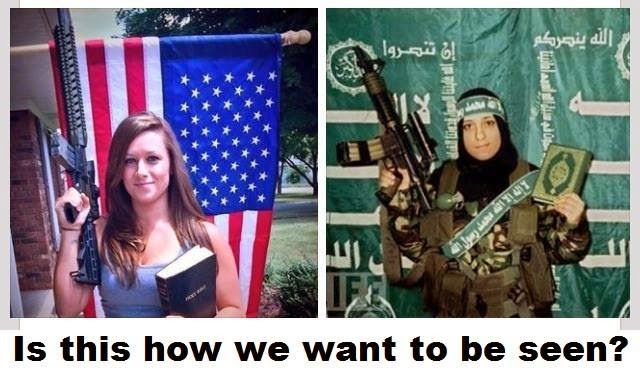 We’re curious what, if any, difference there is between these two pictures? Both women worship the same god. Both of them are holding a book that heavily mentions Jesus, and both are unnecessarily heavily armed–and then there’s the intolerance demonstrated by extremists of either of these very similar religions.

Thank you, Holly, for proving me correct:


Sinclair Lewis on Fascism updated, or my Ambrose Bierce moment

This is a reference to Ambrose Bierce’s entry on Patriotism in the Devil’s Dictionary where he says:


In Dr. Johnson’s famous dictionary patriotism is defined as the last resort of a scoundrel. With all due respect to an enlightened but inferior lexicographer I beg to submit that it is the first.

Likewise, Sinclair Lewis’s rather famous quote on fascism that:


“When fascism comes to America, it will be wrapped in the flag and carrying a cross.”

With all due respect to an enlightened but inferior writer I beg to submit that when fascism comes to America, it will be wrapped in a flag, carrying a cross and a gun, while claiming it is all being done in the name of the Constitution.