Quote of the day (or "Hey, Holly, betcha didn't know you had so much in common with a Mooselim")

I became Republican because I felt that my Islamic values – pro-life, pro-traditional family, pro-business, pro-trade – aligned best with the Republican party platform. I identified as a Democrat for several years when I was younger, but found it hard to defend liberal values as they were so often in conflict with my deeply-held beliefs.--Saba Ahmed

Of course, we know the right wing people who denied that there was more similarities than differences in this picture will have "their heads explode" at the above quote: 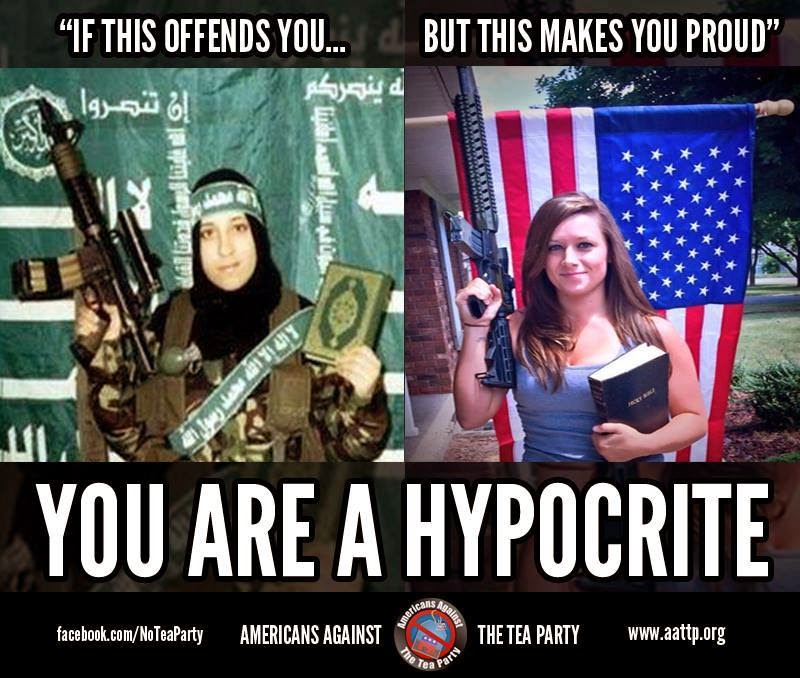 Sorry, you can hem and haw all you want about Holly somehow being different, but the only difference is that she isn't modestly dressed (1 Timothy 2:9–10).

Holly, the only thing about you which makes my head explode is that you are so ignorant and proud of that fact.

You have so much in common with the people you claim to hate.


Although, One could claim that there has been a huge misunderstanding here. One of these is a picture depicts a good woman and the other, by contrast, must be a picture of a bad woman, right?

Surely, you see that one of these pictures shows a patriotic and faithful citizen, a woman whom many see as representing goodness, possessing characteristics which a sympathetic audience would interpret as truly wholesome. She’s simply holding the common and natural token of her faith in one hand. This is a book, I don’t need to tell anyone here, that we all know of and which many of us have read. And her faith, incidentally, is something which she sees as foundational to the existence of her country and to the very idea of morality; her other hand is locked to the hand grip of the symbol and substance (as she and many like her see it) of freedom and power. I’m sure she regards this as an unquestionable right! With a gun, she seems to say with her smile, “You may think I’m a soft woman, but go ahead and mess with me”. Behind her, the banner of not just her nation or people, but of her own identity.

Of course, the other picture is of an American. I can understand why her followers would be upset.


More on modest dress and Christianity.
Posted by Laci The Dog at 6:31 PM