Why don't you assholes light a candle for her? 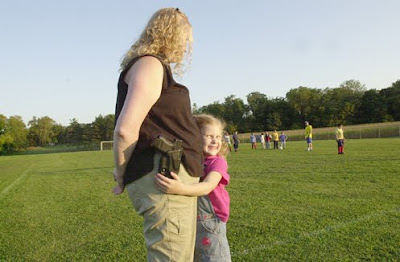 If you want to get a gunloon's cognitive dissonance to go berzerk--just mention Meleanie Hain.

But, there's a big difference between Meleanie and the other victims of gun violence. First off, Meleanie made it quite clear that she was not a victim. Her screen name on the gun blogs was "shefearsnothing" since she knew deep in her heart that her gun would protect her from whatever evil was out there.

So, when the gun bloggers like Linoge and Weer'd Beard say that I am a ghoul for talking about her death, they need to remember there's a big difference between japete's sister and Meleanie. Japete's sister was one of "those murderers, rapists, thieves, muggers, robbers, home-invaders, and other scumbags" who make up the bulk of the victims of firearms.

Nope, Meleanie was one of the gunloons' own. The woman who proudly openly toted her gun while making other people uncomfortable. Someone complained and her carry permit was revoked. Meleanie sued the sheriff for violating her "Second Amendment" rights and had the permit reinstated.

Even Judge Robert Eby questioned whether Hain showed good judgment by ignoring other parents’ safety concerns when he restored her licence.

Yeah, her death could have been prevented, but it was so funny reading how it was "inevitable" the she would have died the way she did in the gun blogs. They just couldn't have dealt with the fact that her husband could have had his guns taken from him once she got a restraining order.

Would she be dead if there were not firearms in her house?

SHE WAS KILLED BY A GUN. NOT ONLY THAT, IT WAS A GUN THEY HAD FOR “SELF-PROTECTION”.

But it didn’t work that way…Did it?

Instead of being one of those anecdotes that the gun cretins like to use to show that defensive gun use happens more frequently than incidents where the gun owner is injured or killed, Their poster child, Melanie Hain is DEAD from having a gun in the house. Now, She is a valid number in the statistic of people killed by handguns in the United States.

Why, get the whole gang together down at the gun store and shoot off a bunch of guns, of course!

So, when people like Weer’d Beard say they don't like the term "gun violence"--don't remind them of Meleanie Hain.

Because she wasn't "those murderers, rapists, thieves, muggers, robbers, home-invaders, and other scumbags".

No, she was another gunloon.

Now, let's watch the gunloon cognitive dissonance berzerk in the comments.
Posted by Laci The Dog at 9:05 PM