Gun Murders on the Increase 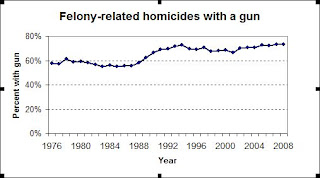 Boston.com published an article about the disappointing performance of President Obama with regards gun control.

Gun tracing records, collected and maintained by the Bureau of Alcohol, Tobacco and Firearms (ATF), tend to implicate certain licensed firearms dealers as common source points in supply chains for trafficking in illegal guns. Several analyses of ATF data, including my own, have shown that 1% of licensed gun dealers are linked to a majority of firearms recovered from criminal enterprises.

Despite the utility of this type of information, Rep. Todd Tiahrt (R-Kan.) who just so happens to be a recipient of significant NRA support, quietly slipped into a 2003 appropriations bill an amendment that suddenly and significantly limited access to these data by both law enforcement and other concerned groups. No longer was it possible to identify so-called "rogue dealers," whose frequent connection to guns subsequently used in crimes would potentially expose shoddy practices. Apparently, to Rep. Tiahrt and his gun-friendly friends, such analyses threatened the sanctity of the Second Amendment, if not our entire system of free enterprise.

There's certainly nothing new there, in fact he even mentions the Brady Campaign's "F" rating for Obama's first year in office. What is new is that nifty little graph.

The gun rights crowd like to claim that in spite of increased gun ownership there's no increase in crime. At best, that's an ambiguous and misleading statement, but we have plenty of that on both sides of the argument. I don't pay much attention. Time will tell, I always say.

This graph however, which shows the percentage of murders committed with a gun is quite damning to the pro gun argument. It shows exactly what you'd expect with decreased gun laws and increased gun ownership.

What's your opinion. Please leave a comment.
Posted by Unknown at 6:57 AM