Reposted by popular demand from Guns and Women (updated twice) 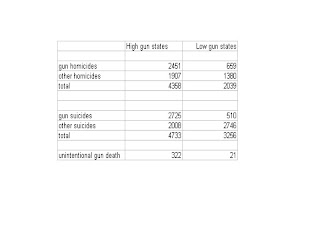 What the chart indisputably shows is that where there are guns there are more incidents of gun violence. It's a sad fact that in America, women are brutalized by men too often, but what this chart shows is that when there's a gun in the house, it becomes lethal. The total figures on suicides indicate that the gun is especially effective. Where there are fewer guns, there are fewer successful suicides. (source is CDC WISQARS 2003)
Posted by Unknown at 7:53 AM