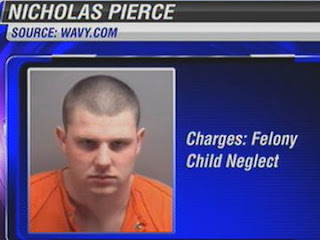 A grand jury has indicted a man in the shooting of his young son.

Nicholas Pierce's four-year-old son was shot in the hip by what Virginia Beach Police describe as a large-caliber gun.

Investigators still have not said who pulled the trigger, but have ruled the shooting as accidental.

Pierce's son is still in the hospital. Pierce is charged with felony child neglect.

Why is this result so rare? Why do most of the accidental shootings result in no charges?

In my opinion, this should be the nearly automatic response.

What do you think? Please leave a comment.
Posted by Unknown at 8:40 AM