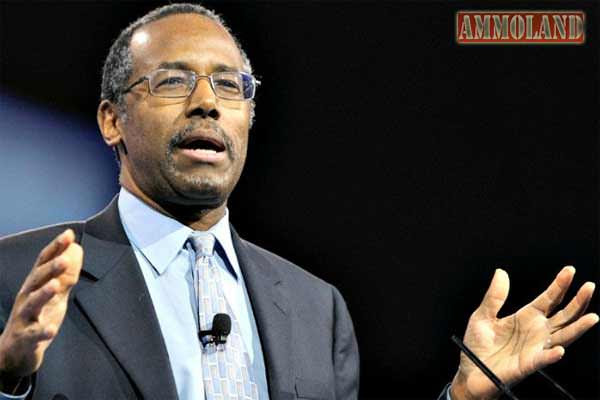 On April 10 2015, I had the opportunity to talk with GOP Presidential hopeful Dr. Ben Carson about guns and gun rights, and he told us that the Second Amendment keeps the government from dominating the people.
Carson talked about the importance of the Second Amendment:

The Second Amendment is incredibly important for a couple of reasons. Number one, our Founders felt that our nation, if ever invaded by outside forces, would be much stronger if the people could help repel those forces. Number two, and perhaps even more importantly, is if the government–our own government–ever became tyrannical, and wanted to dominate the people, the Second Amendment guarantees the people the means whereby to defend themselves.

Bill Whittle on the Second Amendment

Link provided by Mike Z. with the following comment: "I found this video on you tube and I think it offers a good credible analysis of the truth and intent behind the second amendment."

When I opened the link and saw it was a Bill Whittle video, I laughed out loud.  It was in that moment I realized Mike Z. has a great sense of humor.

Posted by Unknown at 2:15 PM No comments:

Labels: felons with guns, the boyfriend 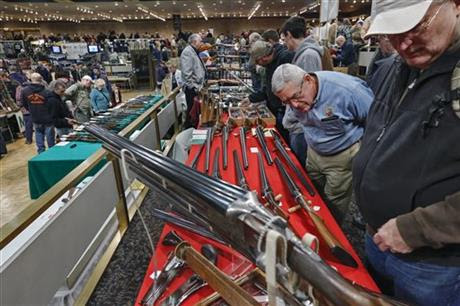 
The crowd is largely male, white and over forty. They wear jeans, and t-shirts adorn everything from American flags to the most “politically incorrect” statements you can imagine. One t-shirt dealer tells me that every time he thinks he’s “hit a nerve” with one of his shirts, those shirts sell out in a flash. The demand is created instantly. These are shirts that your son or daughter would be sent home from school for wearing.
That’s not to classify the crowd as a bunch of “Bubbas”, because you find people from every walk of life. Doctors, lawyers, broadcasters are rubbing elbows with mechanics and truck drivers. They all share the same passion for shooting sports.
The crowd is mostly Republican and conservative. Bumper stickers expressing displeasure of the current President are also in vogue. Those with Bill Clinton’s name were just changed out, substituting Obama’s in early 2009.
Notice the gender and racial balance in that photo. I guess they forgot the usual agenda of trying to portray gun enthusiasts as other than they really are.

And, one can only imagine what some of those t-shirts say, the ones that "hit a nerve" and sell like hot cakes.
Posted by Unknown at 8:38 AM 13 comments:

from ssgmarkcr: "gonna be hard to explain this one."

"A white North Charleston police officer was arrested on a murder charge and the FBI opened a civil rights investigation Tuesday after video surfaced of the lawman shooting eight times at a 50-year-old black man as he ran away.

The video footage, which The Post and Courier obtained Tuesday from a source who asked to remain anonymous, shows the end of the confrontation between the two on Saturday after Scott ran from a traffic stop. It was the first piece of evidence contradicting an account Slager gave earlier this week through his attorney."
http://bearingarms.com/bad-shoot-sc-officer-walter-scott/


A new survey of firearm experts reveals a consensus debunking the myths the gun lobby and conservative media use to try to infect the national dialogue on gun safety to create the appearance of legitimate debate.

New Harvard Research Shows Clear Expert Consensus Against Gun Lobby And Conservative Media Talking Points. New research from the Harvard Injury Control Research Center shows that firearms experts are in consensus against many of the most prolific talking points from conservative media and the gun lobby. According to an April 2 analysis of the research by Mother Jones, the study revealed that the arguments pushed by the gun lobby "don't stand up to scrutiny." Quoting David Hemenway, the center's director, the article noted that some in the media have continued to promote myths about guns, treating them as "legitimate points of debate" and inserting doubt where there is in fact a consensus among experts in the field (emphasis added):

Anyone familiar with the gun debate has heard the talking points of the National Rifle Association and other gun rights advocates: "Carrying a gun for self-defense makes you safer." Or: "If only more ordinary citizens were armed, they could stop mass shootings." As we've shown in our reporting, these arguments don't stand up to scrutiny. After the massacre at Sandy Hook Elementary School, David Hemenway, director of the Harvard Injury Control Research Center, commented on another long-running assertion from the gun lobby: "There is no evidence that having more guns reduces crime," he told the New York Times.
Yet, Hemenway says that some in the media have continued to treat such assertions as legitimate points of debate. That leaves the public thinking, "Okay, so there's disagreement on this," he says. [Mother Jones, 4/2/15]


4. Are Guns Used More Often To Commit Crimes Or In Self-Defense?

Conservative Media: Guns Are Mostly Used As Tool For Self-Defense. Right-wing media frequently promote the myth that guns are primarily used for self-defense, despite guns rarely being used for that purpose. Fox News has claimed that guns could "deter more crimes than they cause" while NRA News has daily features on The Sportsman Channel and their SiriusXM radio program promoting the myth. [Media Matters, 1/3/14, 1/9/13]
Experts: Guns Are Not Used In Self-Defense More Often Than They Are Used In Crimes. Seventy-three percent of experts disagreed with the claim that guns are used "in self-defense far more often than they are used in crime":

Posted by Unknown at 7:39 AM No comments:


The Honolulu Police Department is investigating whether an officer was drinking when he allegedly shot a woman by accident at a Honolulu-area sports bar early Friday morning.
Arrest records indicate Sgt. Anson Kimura, 56, was arrested just before 2 p.m. on Saturday at police headquarters on Beretania Street. He was booked on felony assault charges and released, pending an investigation.
Authorities say Kimura's .38-caliber revolver went of at King's Sports Bar on Friday. A 40-year-old woman believed to have been an employee at the establishment was shot in the abdomen, paramedics said.
A police investigation into the incident is ongoing.
Posted by Unknown at 8:43 AM 3 comments:

They call him a Kenyan Muslim Socialist Marxist Communist Dictator.  The lies and disrespect they’ve spread about him are unprecedented of any other President in history.
All the while, his approval ratings grow.  He smirks and shrugs it off while his policies and actions continue to help our country out of the hole created by his predecessor.
He is the President of the United States of America, and whether they like it or not, he is admired and respected by more people in this country than any other man, for the seventh year in a row.
If You Only News
Gallup released its annual poll of who Americans admire most, and President Obama topped the list.  While the sitting President typically gets the nod for the most admired man, Obama’s reign in the top spot is especially significant when you consider how far the right has gone to discredit his every move, obstruct his entire agenda and disrespect him and his family over the dumbest of non-issues.
According to Gallup:

Police say a gun went off at about 11 p.m. Saturday at the Cathedral of the Blessed Sacrament in Altoona, Blair County.
Posted by Unknown at 8:03 AM No comments:

Shaneen Allen - Crusader for Change (The Bursa 380 has 3 Safeties)


Eric Harris, 44, had been part of an active investigation by the Tulsa County Sheriff’s Office pertaining to the distribution of a form of methamphetamine known as ICE. Undercover officers purchased meth from Harris last month, at such time he informed the officers that he had access to guns and ammunition, if they were interested in buying them. But Harris, who is a convicted felon, was not legally allowed to possess a firearm.
Officers then met with Harris around 10 a.m. Thursday in the parking lot of a Dollar General store to purchase a 9mm semi-automatic pistol and three-hundred rounds of ammunition. After the transaction, authorities moved in to make an arrest, and at that time, Harris fled on foot.
As Harris ran, he was seen reaching towards his waistband, but Deputy Robert Bates was able to tackle Harris to the ground. Harris continued to resist arrest, and a struggle ensued, during which time Harris refused to move his left arm, which was still reaching towards his waistband.
During what the sheriff’s office called a “rapidly evolving altercation” and in an effort to subdue Harris, Bates grabbed what he thought was a taser from his tactical carrier and fired. But what Bates had actually grabbed was his service pistol, according to a report from a local ABC affiliate.
Harris was struck a single time and immediately rushed to the hospital where he was pronounced dead a short time later. The initial investigation indicated that Harris was likely under the influence of PCP. An autopsy is scheduled to be conducted.
Authorities did not immediately say whether they found a gun or other weapon on Harris.
This story's got everything in it. First of all, it contains the old tried and true, he-was-reaching-into-his- waistband justification. Then the rather unique and truly incredible, cop-grabs-gun-instead-of-taser nonsense. And if all that's not enough, the suspect was "under the influence of PCP."
Brwahahahahahahahahaha
Posted by Unknown at 4:04 PM 3 comments:

The defenders of this nonsense always mention the hateful blowback suffered by Bush and Cheney.  Well, much of that was over-the-top too.  I especially object to hateful rhetoric that calls for the death of one's opponents, regardless of which side of the aisle you're on.
Posted by Unknown at 12:20 PM No comments:


I came upon this while dropping by the Ammoland.com site and thought it would be a good example of both the capabilities of forensic science and also the time spans involved in processing it.  Here is the ammoland.com site,
http://www.ammoland.com/2015/04/forensic-evidence-doesnt-match-story-result-homicide-charges/#axzz3WSmgRfFE
"Two years ago, in May of 2013, James George Stiffler shot a man who was burglarizing his home in Lewis and Clark County, Montana. The burglar, Henry Tomas Johnson of Helena, managed to make it to his car, but died before being able to leave the property. The case illustrates the ability of forensic science to determine details of what happened.""But investigators were unable to find any blood in the house, or a bullet or bullet holes, even though the bullet had exited Johnson’s body. They did find a 9 mm bullet outside with DNA that matched Johnson. The bullet location was consistent with a shot fired by Stiffler while inside the house, at Johnson as he was exiting a window, and indicated a different direction of fire than what Stiffler had stated."
The author of this first article made some very good points on effective alternatives,
"Stiffler made three mistakes:
(1) He did not block or disable the criminal’s car to prevent escape.
(2) Bigger mistake: He entered the house instead of letting the police do it.
(3) Biggest mistake of all: He lied to the police.
However, when a home intruder is “trying to escape,” he may be running to get a weapon. In that respect the murder charge looks bogus to me."
While the Ammoland gives an overview of the case, I would encourage everyone to go to the original loacal news article because it gives IMHO an excellent description of how the forensic evidence helped them arrive at the truth, but also how law enforcement checks a witness statement against what the physical evidence tells them.

And as the Ammoland article mentions, there is still an opportunity to use a Castle Doctrine defense, though it might be a hard sell to a jury in light of his telling quite the story to police.  In fact, I wonder if there are any accompanying obstruction charges that havn't been mentioned.

This is also a wonderful example of a reporter going the extra mile to write a good story instead of just puking out a slightly rewritten version of a police press release.