A Coming Era of Civil Disobedience? 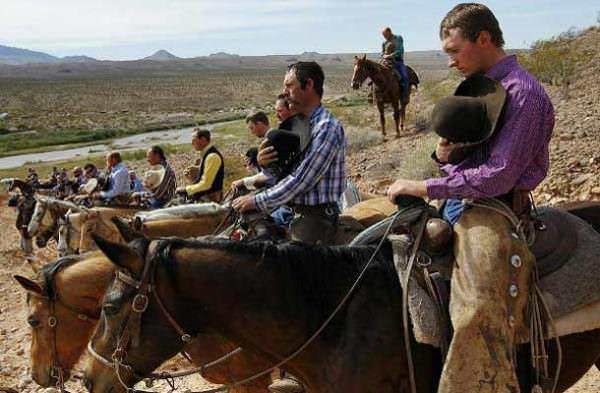 
The Oklahoma Supreme Court, in a 7-2 decision, has ordered a monument of the Ten Commandments removed from the Capitol.
Calling the Commandments “religious in nature and an integral part of the Jewish and Christian faiths,” the court said the monument must go.
Gov. Mary Fallin has refused. And Oklahoma lawmakers instead have filed legislation to let voters cut out of their constitution the specific article the justices invoked. Some legislators want the justices impeached.
Fallin’s action seems a harbinger of what is to come in America — an era of civil disobedience like the 1960s, where court orders are defied and laws ignored in the name of conscience and a higher law.

Only this time, the rebellion is likely to arise from the right.

But who decides what is an “unjust law”?


Close all the "flaws" you want but as long as these idiots can resort to private sales, the problem still exists.
Posted by Unknown at 9:38 AM 18 comments:

Labels: guns for everyone, the price of freedom


An anti-violence coalition including activist priest Father Pfleger has taken the unusual step to file a lawsuit against three Chicago suburbs for weak gun store oversight, that they claim is a main source of guns ending up in Chicago crime scenes.
“These three villages are not taking the minimal steps that they need to to stop the flow of guns into Chicago,” Michael Persoon, attorney, said.
“I’m here this morning as part of this lawsuit, because I’m tired of seeing the bloodbath taking place in our city’s streets. We all understand the realities,” Father Pfleger said. “Riverdale, Lyons, and Lincolnwood; you have failed to enforce best practices on your own. We pray that this lawsuit will now force your hand, because it’s time to shut off the gun flow onto the streets of Chicago.”
The lawsuit makes the claim that African American communities in Chicago are facing disproportionate hardship and therefore are having their civil rights violated under the Illinois Civil Rights Act. This civil rights violation is occurring, the suit claims, because Riverdale, Lyons and Lincolnwood do not have enough oversight when it comes to licensing and regulating gun shops that has allowed criminals to easily keep the flow of guns streaming onto the Chicago’s gang riddled streets.
“Those illegal firearms are flowing into a pocket of communities violating the civil rights of the individuals who reside there, who are afraid to go near their windows or let their children play in the park, much less their own yards,” said Kathleen Sances, a member of the Coalition for Safe Chicago Communities, one of the plaintiffs in the lawsuit.
The daring lawsuit joins two ministers, two mothers whose children were the victims of gun violence, and the Coalition for Safe Chicago Communities activist group. The group claims basis for the suit from a Chicago Police Department study that showed that between 2009 and 2013, guns sold in the stores in Riverdale and Lyons were used in 20 percent of Chicago’s violent crimes leading to 3,000 guns being recovered at these Chicago crime scenes.
One of the plaintiffs is Annette Nance-Holt a mother whose son Blair was killed in 2007 on a Chicago bus while he was attempting to protect a friend when a gang member boarded the bus and started firing.
“Our communities are being flooded with guns,” she said. “We have to do something… to take a stand to help get these guns off the street.”
Posted by Unknown at 5:56 PM 16 comments:

Shall Not Be Infringed

There Are No ‘Absolute’ Rights. “Nearly every idea in BofR comes with restrictions and limitations.” #2A #gunsense http://t.co/Flqxs2vZJK

Chicago police are calling for increased gun controls after another deadly Fourth of July weekend saw 65 people shot, 10 of them fatally. A 7-year-old boy was among the dead. At one point, police said they were confiscating an illegal firearm every hour.

Thirty people were shot across Chicago from dusk on Saturday until dawn on Sunday, after Independence Day celebrations. One of them was Amari Brown, seven, killed in his front yard late Saturday night in the Humboldt Park neighborhood.
Posted by Unknown at 7:28 AM 6 comments:

Labels: the proud and the free

Houston 3-Year-old Critical - No One Responsible - Another "Sad Reminder"

A three year old boy is in the hospital after shooting himself in the head with his grandparents' gun. A sad reminder of the importance of gun safety and that all weapons should be stored away or locked.

Yesterday afternoon, deputies say the child was put down for a nap in the master bedroom at his grandparent's home on Puget Lane off Ella Boulevard in northwest Harris County. They say the child got a hold of an automatic pistol that was left on the night stand and shot himself in the head.

At last check, the little boy was listed in critical condition.
Posted by Unknown at 7:35 AM 3 comments:

The incident that brought Torres to court happened on Aug. 20, 2013 when Gwinnett County Police responded to a home on Stafford Drive in unincorporated Lilburn. Torres and his grandson’s father, Rochell McCoy, who was 29 at the time, were in an argument when police said Torres fired several shots at McCoy in the driveway. One of them struck 23-month-old Deandre Vega, three weeks from his second birthday. Vega later died at a local hospital. There were no other injuries.

Torres, who was 39 at the time, remained on scene and was present when officers arrived. He was charged with felony murder and aggravated assault.

Defense attorney Edwin Wilson brought up his client’s prosthetic right leg and the subsequent vulnerability when confronted by someone larger than him, such as McCoy. He stressed that Torres had asked McCoy to leave multiple times.

“Are you aware that nobody intended any harm to the child?” he asked Leak.

“Correct,” Leak responded.
Posted by Unknown at 7:28 AM No comments:

NRA: Hunter Cayll was born without hands, but that hasn't stopped him from pursuing his passion for the shooting sports. Follow Cayll's journey to becoming a pro shooter in this episode of NRA All…

Starting July 1, 2015, nonlead ammunition will be required when hunting on all California Department of Fish and Wildlife (CDFW) lands and for all Nelson bighorn sheep hunts anywhere in the state.

CDFW reminds hunters who plan to hunt bighorn sheep or at any CDFW wildlife area or ecological reserve where hunting is allowed on or after July 1, 2015 to acquire nonlead ammunition well ahead of their hunt. Hunters are also encouraged to practice shooting nonlead ammunition to make sure firearms are sighted-in properly and shoot accurately with nonlead ammunition. Nonlead ammunition for some firearm calibers may be in short supply so hunters should plan accordingly.

Two men were shot over the weekend in Wayne County, IL and the sheriff's office says it appears to be a case of self-defense.

The sheriff says two men, who are white, made racial remarks to an African-American man, 26-year-old Erick Paula, at a party Saturday night.

The sheriff says when Paula was driving home around 3:30 Sunday morning, Greenwood and Barrowman came up behind him and flashed their lights. Paula pulled over because he thought the car was trying to pass.

The sheriff says Greenwood and Barrowman then confronted Paula and said they were "looking for a fight."

Paula warned them he had a gun permit and didn't want to fight.

The sheriff says the men continued to try to fight him, so Paula pulled out his gun and fired ten shots. Barrowman was shot once, and Greenwood was hit several times.

The sheriff says Paula immediately reported what happened to the sheriff's office.

We're told it will likely be up to a grand jury if charges will be filed on anyone.
Posted by Unknown at 8:43 AM 4 comments:

Ammoland for John Lott's take on it