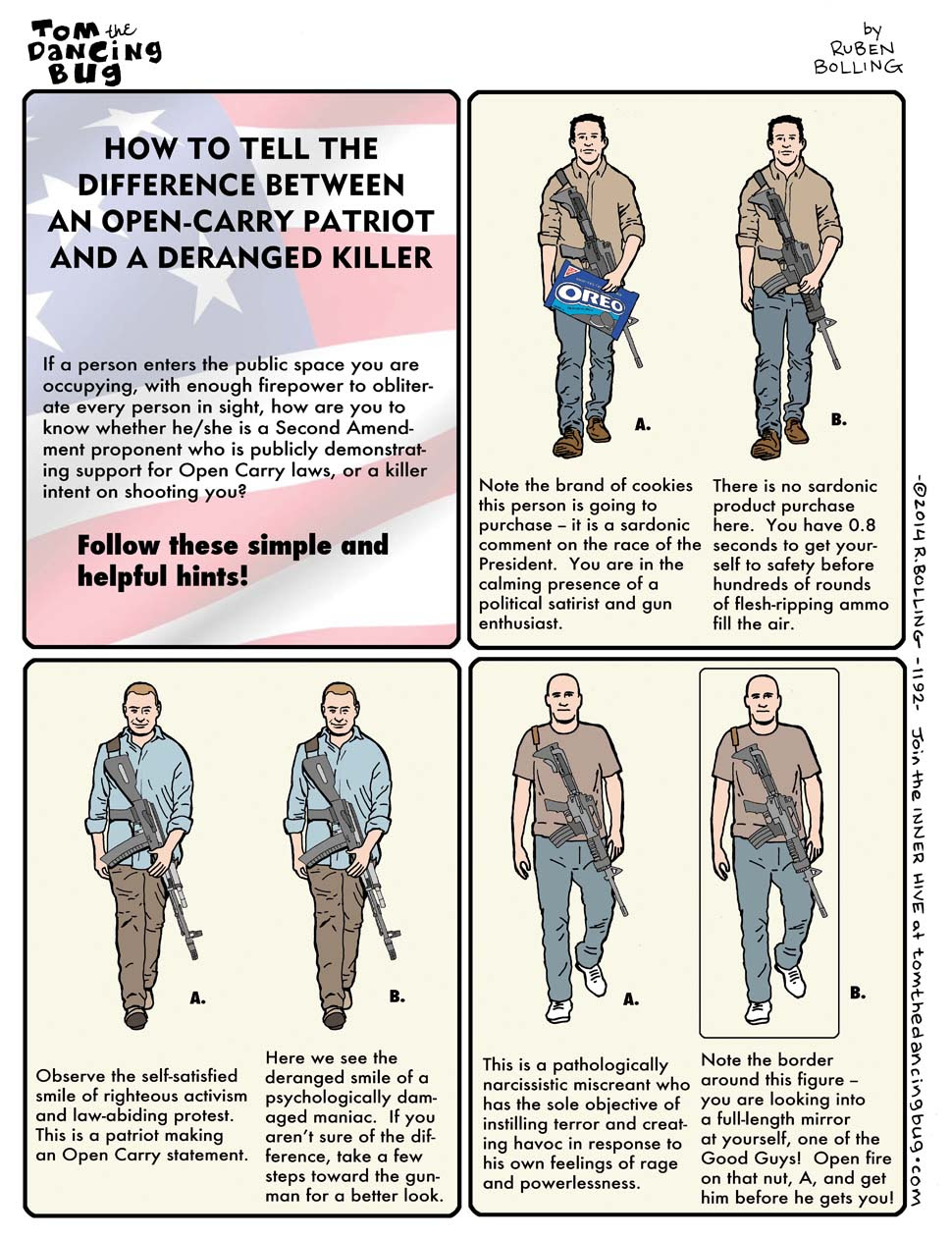 Posted by Unknown at 2:30 PM No comments:

As reported here, Republican state Senator Chuck Estes suggested that elderly folks concerned about Open Carry activists storming the aisles of a grocery store were experiencing a “phobia” and should get help.
A lot of Conservatives really need ‘help’ then, starting with C.J. Grisham, Open Carry Texas’s leader.

Posted by Unknown at 2:21 PM No comments:

All over the world:

Only in the US:

Indiana Shooting Suspect Wants 'to chill this weekend,' Will Turn Himself In Next Week


When I first started blogging you gun nuts (not YOU gun nuts, but your predecessors) told me no crimes were ever committed with assault rifles.  Some time later, it changed and the gun nuts started talking about how tiny the precentage is, less than "one tenth of one percent" is what they used to say.  After that, Obama became the best assault rifle salesmen the world had ever known, with a little help from WayNe La Pierre, and we stopped hearing about it at all.
Posted by Unknown at 6:32 PM 2 comments:

The True Cost of Gun Violence

Posted by Unknown at 6:18 PM No comments:

Labels: the cost of gun violence

When asked whether Shephard had a gun, investigators would only say they were still processing the evidence.

Eight Years Of One Demographically Symbolic President Is Enough


Brwahahahahahaha . What, again?
Posted by Unknown at 4:27 PM No comments:

That's the misdirection Megyn Kelly picked up on.  Filthy liars, all.

Plus, The video commenter says that gun rights groups claim not one of the Milaukee murders was done by a permit holder.  The Fox stooge Marc Thiessen said there was one murder committed by a concealed carry permit holder, apparently not in Milwaukee.  Yet the VPC has two listed, both in Milwaukee.

The truth is there are two THAT WE KNOW ABOUT.  That means there are more than two, we just don't know how many.  Then, let's not forget to consider all the misuse of guns committed by permit holders that falls short of murder.  That's how we get percentages that are equal to gun owners at large and the general public, in spite of all the lies and tricks the gun rights defenders try to pull in order to claim the incredible.

Labels: guns and anger, guns for everyone, guns in the home

A Fascinating New Study on Gun Owners and Anger


The new study compares rates of impulsive, angry behavior with access to guns. Swanson and his research colleagues asked 5,653 respondents to answer questions about their own behavior, and also asked these same research subjects if they owned and/or carried guns. The subjects lived in cities, suburbs and rural areas throughout the United States, and roughly one-third stated that they owned or had access to firearms, which seems to be what we consider the national firearm ownership rate to be today.
Every respondent was asked whether they had tantrums or angry outbursts; broke something in anger; lost their temper and got involved in physical fights. These are classic indicators of impulsive, angry behavior, with the tantrums/outbursts being the least serious, the fights being the most serious and the breaking of some object in between. Both the owners and non-owners of guns reported engaging in all three types of behaviors, with tantrums being three times as common as physical fights for both groups, and the percentage of gun owners and non-gun owners engaging in any of the three anger indicators being about the same.
What struck me as I read the survey results was that overall, there was not a great difference between gun owners and non-gun owners regarding to what degree they admitted engaging in any form of impulsive, angry behavior. Where the difference was clearly pronounced was among the 5 percent (roughly 290 people out of 5,600) who admitted to owning 11 guns or more, which was the only gun-owning group whose penchant for getting into fights was significantly higher than people who owned no guns at all. For that matter the percentage of the 11+ gun-owning group to get into physical altercations was substantially higher than gun folks who owned fewer guns.
Where the number of guns owned by individuals seemed to be a real risk issue can be found in the correlation between number of guns owned, engaging in any of the three anger indicators and carrying a gun outside the home. The good news in this survey was that less than 5 percent of the respondents reported that they walked around with a gun. The not-so-good news is that folks who owned six or more guns and carried a concealed weapon reported that they engaged in at least one of the three impulsive behaviors four times more frequently than persons who owned five or fewer guns.
Posted by Unknown at 3:04 PM 3 comments:

More on the Real Meaning of the 2nd Amendment

The purpose of the 2nd Amendment in America was to ensure that state militias continued to have the power to tyrannize slaves, to suppress their rebellions with lethal force, and to suppress any other rebellions they felt went against their "rights" to tyrannize others.
It was put in place to do pretty much the opposite of what gun nuts claim today. It was put there to enable governmental suppression of slave rebellions, first and foremost -- not to protect the rights of those who wanted to rebel.

Coyote kills (and wolf kills and mountain lion kills and buffalo hunts and so on) these days are said to be justified because of all the damage these animals cause to livestock and crops. "Everyone knows..." Except they don't. And the farmers and ranchers often wildly exaggerate their losses. The real point of these killings is not to protect livestock and crops, it is to assert life and death power over the Other, in this case, the Natural World.Gun rightists don't care a whit about preventing "tyranny" in any rational sense. By and large they were either silent or actively cheering on the gutting of the rest of the Bill of Rights by Congress and the Executive during recent times, most being "patriots" and all who don't believe in such luxuries as "rights" when it comes to other citizens and terrorists -- who are often one and the same in their view. While a modern form of tyranny was being imposed and consolidated even before the advent of the Glorious Global (and Forever) War on Terror. In other words, throughout the abrogation of what remained of the Bill of Rights, Sacred Second believers either paid no attention (as long as no one tried to grab their guns!) or they were in the vanguard of the cheerleaders, where most of them still are.They don't want to prevent tyranny, oh no. They just want to be sure they're the ones to impose it.
Posted by Unknown at 8:52 AM 17 comments: 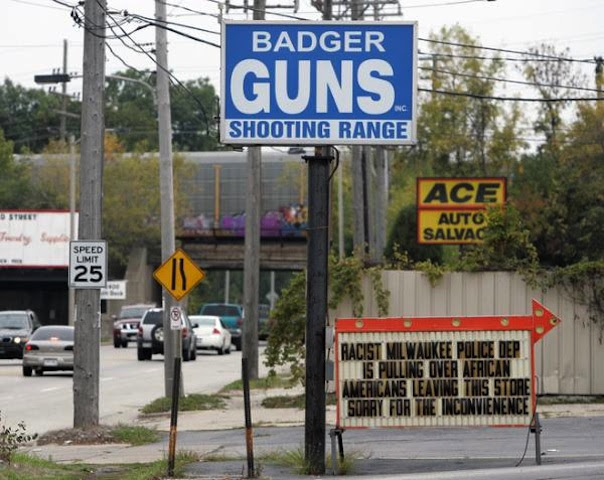 On Monday, they joined other officers in the suit against Badger Guns for being negligent when selling the guns used to shoot them.
“Badger Guns needs to be held accountable for irresponsibly supplying guns to criminals who have shot and seriously wounded brave Milwaukee police officers,” said Paul Helmke, President of the Brady Center to Prevent Gun Violence in a statement.
“We proudly stand with law enforcement against corrupt gun dealers whose reckless and illegal conduct places police officers in harms way.”

"In some years, it's found to be the number one seller of crime guns in the country," said Jonathan Lowy of the Brady Center.
"It's our hope that we can bring compensation to these brave, heroic victims also to send a message to send a message to sellers like Badger (that) if they profit off of selling guns to criminals, they have to pay the consequences."
Posted by Unknown at 8:35 AM 8 comments:

More on the Ghost Gun Problem


One person was killed in a shooting on Monday morning at Wayne Community College in Goldsboro, North Carolina, and the campus was on lockdown as authorities searched for the shooter, according to media reports.
At least one person was shot in a school library, Daniel Wiggins, assistant operations manager for Wayne County, North Carolina, told CNN.
The suspect is a white, bald man, about 5-foot-11, with a goatee and tattoo over his left eye, CNN reported, citing Wiggins. The suspect was wearing a blue jacket and light-colored pants.
Wiggins told CNN that multiple law enforcement agencies were at the site. The motive for the shooting was not known and it was not clear if there were other victims.
Posted by Unknown at 4:28 PM 2 comments:


A three-year-old boy in Cleveland, Ohio shot and killed a one-year-old boy after picking up a handgun that had been left unattended inside a home on Sunday.
The infant was rushed to hospital with a gunshot wound to the head but was later pronounced dead, reports the Associated Press.
Investigators were trying to determine where the gun came from, Cleveland Police Chief Calvin Williams told reporters.
“It’s a sad day for Cleveland,” said Williams. “This fascination that we have with handguns, not just in this city but in this country, has to stop. This is a senseless loss of life.”
I guess Police Chief Williams is one of those political hacks who just doesn't understand.
Posted by Unknown at 4:25 PM 3 comments:

The NRA Bans Guns at its Own Convention

Why the Gun Lobby is Winning 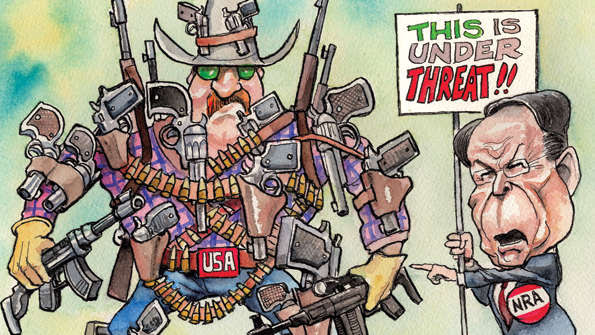 The NRA can never declare victory, for then what would be the point of it? After each concession, it demands more. Some day, perhaps, it will ask for something so outrageous that it sparks a backlash. But for now it strikes a chord. For the first time in two decades a new poll by the Pew Research Centre found more Americans supporting gun rights than gun controls. How can this be so, when such a huge majority favour background checks? The answer is that background checks are tools of the state and trust in the state has plunged in the past decade, notably on the right where it blends with loathing for Mr Obama. Wayne LaPierre, the NRA’s charismatic frontman, told a conservative crowd in February that when criminals attack, our wives, sisters and daughters face assault through “a kicked-down door”, “laws can’t protect you…You’re on your own.” That is the authentic voice of the gun lobby in 2015. Fear smothers rational debate. It is meant to.
Posted by Unknown at 9:07 AM 12 comments: