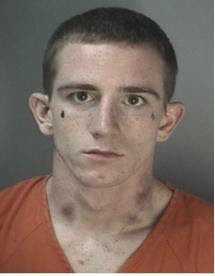 A Bloomington man was arrested early Monday in connection to an area shooting spree that ended in the death of Pizza X delivery driver Adam Sarnecki.
James D. Finney, 21, is suspected in three recent crimes involving firearms, including the murder of Sarnecki, 22, Bloomington Police Chief Mike Diekhoff said during a press conference Monday.

Yeah, Indiana's right up there with Florida and Arizona. One of the things about Indiana is how much they hate the "May Issue" policy of some states when granting concealed carry permits for handguns.

The problem is you have guys like this 21-year-old Finney. As a minor he'd had many scrapes with the law, was well known to the local law enforcement, yet might have been able to qualify for a carry permit nonetheless. He probably didn't bother, inveterate criminal that he was.

But, this is the kind of young man who screams out for "May Issue," but in Indiana they don't care.  They'd rather have what they consider freedom, the ability for anyone to own guns and carry them anywhere, than safety from guys like this.  The thought of giving a tiny bit of power to the police with regards to gun rights is unthinkable.

What's your opinion?  Please leave a comment.
Posted by Unknown at 8:17 AM