Berlusconi Does it Again 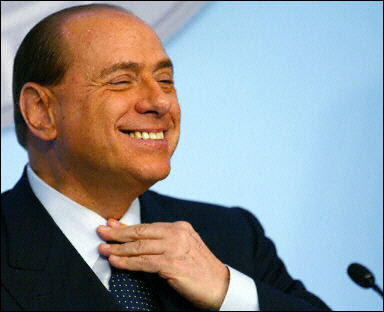 The International Herald Tribune carried the story yesterday of Italian Prime Minister Silvio Berlusconi's latest gaffe. In response to the recent seeming increase in rapes in and around Rome, Berlusconi proposed to deploy 300,000 soldiers in the streets to fight crime. But he qualified this solution by saying, "You can't consider deploying a force that would be sufficient to prevent the risk. We would have to have so many soldiers because our women are so beautiful."

Giovanna Melandri of the opposition Democratic Party said Berlusconi's comments were "profoundly offensive," saying the pain of rape could never be joked about in such a way.

Berlusconi, in an effort to explain himself, said he was complimenting Italian women "because there are only about 100,000 people in law enforcement, while there are millions of beautiful women."

He stressed that rape was a serious and "disgraceful" crime. But he added that people should never forget a sense of "levity and good humor" whenever his comments are concerned.

This strange frivolous attitude is typical of the Prime Minister. Some feel it's because he thinks he's above the law and above the normal restraints people normally have to exercise in public life. He says whatever he wants. His background as one of the wealthiest businessmen in the world as a media mogul prior to entering politics might lend credence to this theory.

A few years ago he amazed the world and created an international incident when he said German Chancellor Gerhard Schroeder could play a Nazi in the movies. His reluctance to apologize for these gaffes, I suppose, is based on the fact that they're made in jest and it's not his fault if people don't have a sense of humor.

After 9/11 he made comments about Islam that were much more serious, at least when taken out of context. One of his famous quotes is this:

Immediately after these remarks the rest of Europe denounced him as imprudent and reckless, perhaps endangering our countries unnecessarily. One response was to compare Berlusconi to bin Laden.

"The billionaire [Osama] Bin Laden and the billionaire Berlusconi are cut from the same anti-communist cloth. They both represent fundamentalism - one of the markets, the other of religion."

Please leave a comment. Thanks to Bob S. for the idea.
Posted by Unknown at 7:48 AM