What Would Pascal Have to Say? 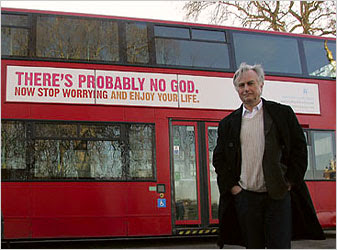 The New York Times has a report on an unusual ad campaign in Britain in which atheists are trying to reach the people. The idea was born in response to the Christian advertising already in place.

The advertisement on the bus was fairly mild, just a passage from the Bible and the address of a Christian Web site. But when Ariane Sherine, a comedy writer, looked on the Web site in June, she was startled to learn that she and her nonbelieving friends were headed straight to hell, to “spend all eternity in torment.”

I'm not completely objective in this, but comparing the two messages, one threatening hell and the other suggesting to enjoy life, I have to side with the enjoy life crowd.

When I was a kid growing up in New Jersey in the 50s and 60s, the standard fare at Catholic school was pretty much the same and the Christian message cited above. Only baptized Catholics who died in the state of grace could get into Heaven, they said. I think that was the very first thing I rebelled against. Something deep inside me knew God would never have it that way. And, I'm happy to report the Catholic Church has lightened up on its teaching in this area since the Second Vatican Council.

What do you think about this spending "all eternity in torment" bit? Isn't it self-contradicting to preach "love thy neighbor" while threatening something like this? If there really is a God, wouldn't he or she be bigger than that? If God could create the universe and keep it running, wouldn't the same God be able to reconcile that which the little human mind finds irreconcilable?

Pascal made it very simple.

What's your opinion?
Posted by Unknown at 7:57 AM