Travis Unholz - Prince of a Guy 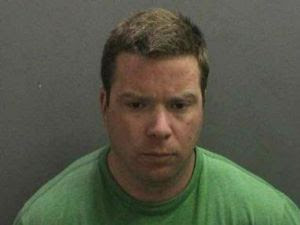 In a deal that will end his law enforcement career, a sheriff's deputy pleaded guilty Monday to injuring his wife and then violating a protective order by attempting to obtain a gun.
Travis Christopher Unholz, 36, of Trabuco Canyon pleaded guilty to one felony count of attempted possession of a firearm in violation of a protective order and one misdemeanor count of domestic battery with corporal injury, according to a news release from the Orange County District Attorney's Office.
He had denied felony counts on both those charges earlier this month but took the offer from prosecutors and pleaded guilty to one of them as a lesser charge. Unholz was sentenced to 19 days in jail and three years of formal probation, including participation in a 52-week batterers treatment program.
He is also barred from owning or possessing any firearms, and a protective order was issued prohibiting him from having any contact with the victim or his two children for three years, prosecutors said.
It's a violation of federal law to posses a firearm after a domestic violence conviction, which will effectively end Unholz's law enforcement career.

This guy is a perfect example of the kinds of people you find among lawful gun owners. The overall percentage is low, but not nearly as low as they claim. Unfortunately, brutal, wife-beating, low-lifes are to be found in all groups. Perhaps among gun owners the percentage is actually higher than in the population at large. The testosterone-driven aggression, the adolescent belligerence, the terrible difficulty with authority, all lend themselves to anti-social behaviour.

I wish I had a nickel for every time one of the gun defenders said they don't know a single gun owner like that, that being anything negative like the description I offered above or anything else. They swear they don't know one who drinks too much or has a problem with anger.

What's your opinion? Please leave a comment.
Posted by Unknown at 1:58 PM