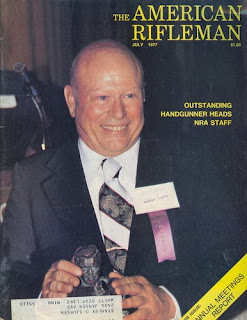 The story involves former NRA leader Harlon Carter, who in 1977 took control of the National Rifle Association (NRA) during the "Cincinnati Revolution" and turned the organization into a no-compromise, highly partisan entity that embraces extreme positions on the Second Amendment and gun policy.

Four years after he took power, the press uncovered a disturbing fact about Carter. On March 3, 1931, a 17-year-old Carter shot and killed 15-year-old Ramón Casiano in Laredo, Texas. After returning home from school that day, Carter was told by his mother that there were three Latino youths loitering near the family's property. Carter left his house, shotgun in tow, to confront them. After finding Casiano and his two companions at a nearby swimming hole, Carter pointed his shotgun at them and ordered them to come with him. Casiano refused, pulled out a knife, and asked Carter if he would like to fight. Carter then pointed the shotgun at Casiano. Casiano laughed and brushed the gun aside while taking a step back. Carter asked Casiano, "You don't think I'd use it?" and then fatally shot him in the chest. After initialy being convicted of murder, Carter was able to successfully appeal and get the case thrown out.


The similarities to the murder of Trayvon Martin are obvious and the NRA again stands at the center of controversy because of their authorship of the "Stand Your Ground" law that has allowed George Zimmerman to remain a free—and armed—man.

The sick connection between the former NRA leader and George Zimmerman is another good example of the fanaticism of the NRA leadership. Is it any wonder that they're membership often disagrees with the party line, not to mention how small it is compared to the number gun owners at large.

La Pierre, who probably learned a great deal from Harlon Carter, employs rhetoric that couldn't possibly appeal to normal people. His ranting about the possible problem they'll face during Obama's second term is so full of lies and distortions that no rational, thinking member could possible accept it.

But apparently some do.  Even around here, how many times do our antagonists claim that we want to take ALL the guns away?  How often to they liken my version of gun control to Prohibition?

Unfortunately these convenient misconceptions run deep.  They make the  pro-gun argument sound better that it really is.

What's your opinion?  Please leave a comment.
Posted by Unknown at 7:03 AM