I keep seeing talk about militarised police forces in the US and that police forces are acquiring military equipment. This post has been stewing around for a while, but the events in Fergusson, MO and people's reactions to them make me want to post this.

There is a big problem in Law Enforcement in that there are three distinctively different types of police institution emerged with various levels of militarism.

The French, under Napoleon, instituted the Gendarmerie, a state military police model. It evolved from the “Marechaussee,” which had had a dual military and civil function since the 16th century. The model was exported across Europe by Napoleon. The Modern French Gendarmerie is an internal military force with police powers under the Ministry of the Interior.  In fact, many smaller areas are patrolled by the Gendarmerie the way that State Police forces or Sheriffs patrol less populated areas in the US.

This is in contrast with Britain as the British developed two models. The first, set up to answer similar challenges to the Gendarmerie in France, was the Royal Irish Constabulary model. It was close to the state military model, but distinctively styled as part of the civil power of the state and subordinated to the Magistracy. The Irish model was subsequently exported to Britain’s colonies and became the basis of forces such as the Indian Police Service.

The Second was the Metropolitan Police, which was consciously created as a local force with a uniform that was deliberately different from the military and a mission that focused on prevention of crime rather than the repression of disorder. This state civilian model became the basis for all UK forces on the mainland and the principal influence on the development of East Coast US policing in the 1840s.

That means the US model is based more on prevention than keeping the rabble under control.  On the other hand, many nations actually have police forces which are military forces.  While some people in the US and other nations with a British heritage might see a militarised police force as a threat, it is pretty normal in other countries. 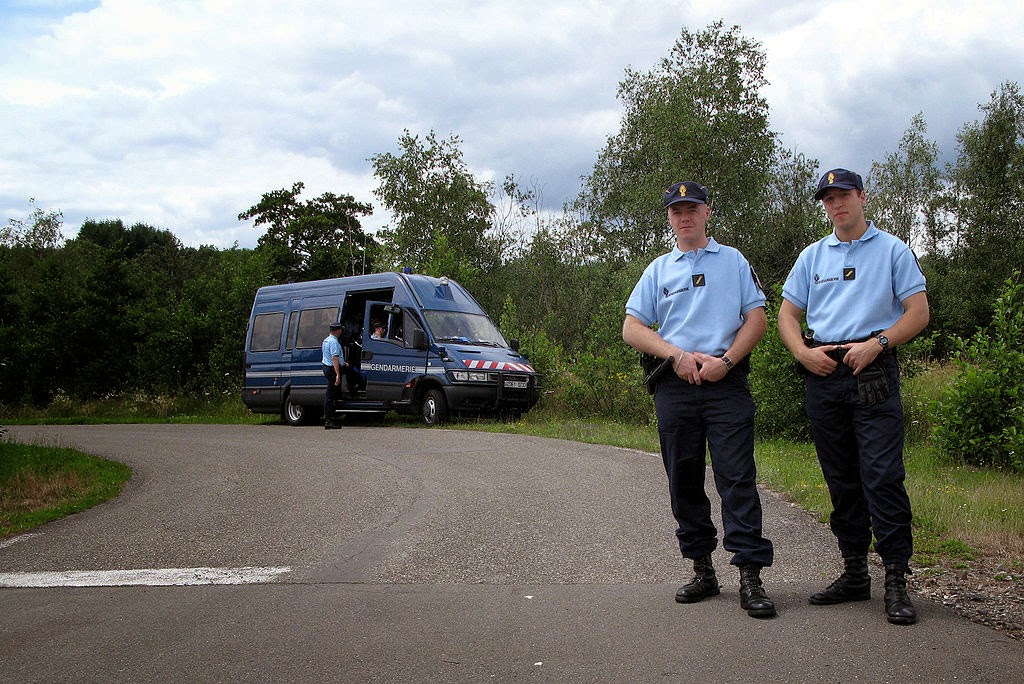 I've been toying with blogging something about militarised police since this is a tangential aspect of the Second Amendment issue in a couple of ways (civilian control of the military, the nature of the military, and the arms race due to the misinterpretation of the amendment). The abuses of the historical French Gendarmes were well known prior to the French Revolution and were something that led to the Civilian police forces in the Anglo-American societies. That was one of the many aspects of the fear of standing armies and the desire that ANY type of military force is kept under civilian control (i.e., "well-regulated").  Tyrants can use a military force to oppress the people.

The term gendarme comes from the French phrase Gens d'armes or men at arms. To some extent, Gendarmes existed in English societies where men at arms were called to enforce laws, or oppress people.  To some extent, the British colonial police police forces were gendarmeries.


It might come as a surprise that the French Gendarmerie Nationale has a special forces unit, Groupe d'Intervention de la Gendarmerie Nationale (GIGN).  GIGN is trained to perform counter-terrorist and hostage rescue missions in France or anywhere else in the world. GIGN has a very good reputation in Spec-Ops and has actually trained the US Delta Force and the German GSG9 in its techniques!

In other words, GIGN ain't your typical SWAT team.

You might want to read more on Gendarmeries  if the topic of militarised police piques your interest since there are a lot of dynamics that are alien to someone from the US in operation here.  For example, the Gendarmerie is somewhat in competition with the Police Nationale (the "non-militarised" flics).  In short, this is a brief summary of a very complex topic.In the US, this boils down to what is the nature of the military and should the police be a militarised force, which is an alien concept in Anglo-American societies. That's why people get upset about the thought of police with military equipment, even though many nations actually have dedicated militarised police and are not dictatorships.

The footnote to this is that Italy's Carabinieri were instrumental in toppling Mussolini!

Think about that when you think about this topic.  The real issue isn't so much the nature of the police force as much as that is stays within the law.

As I said in a forum:

"So, which side is going to put down their arms first in the US: the police or the civilians?"