If you've noticed one thing about this series: it should be that the death of the child has led to the mother becoming involved in the movement to end gun violence. 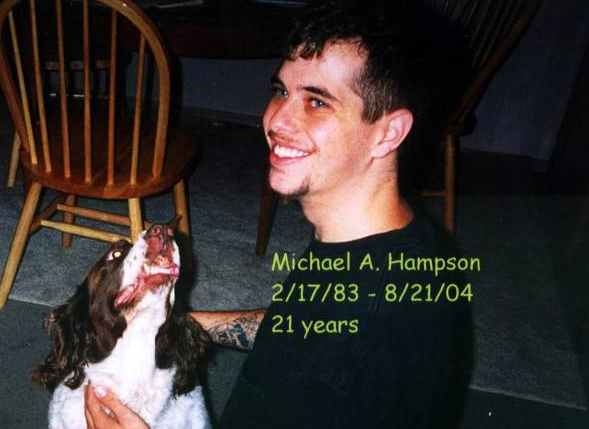 That is very true about Mari Bailey whose son, Michael Hampson was shot and killed in 2004.  Her son may have passed, but Mari keeps his memory alive.

Michael was shot and killed by someone who he thought was a friend.

Michael was attending culinary school that night — he dreamed of becoming a chef — and he was supposed to be in school until 10:30 p.m., but the teacher dismissed the class 30 minutes early. Michael drove to a friend’s house.

There were seven people at the house, including his friend’s mom. The mom wanted to buy a new TV, so Michael volunteered to take her to Wal-Mart since he was the only one with a car. While she was getting ready, her son — he was also Michael’s friend — became angry.

No one knows what set him off, but he pulled a gun and pointed it at everyone in the house. Eventually, the shooter aimed the gun at Michael’s chest. He was about a foot away when he pulled the trigger. The bullet went through my son’s chest and became lodged in a kitchen cabinet. Michael collapsed, but he wasn’t dead.

Unfortunately, everyone in the house panicked and instead of calling 911, they made up a story and decided to hide the gun. It was then that they finally called 911. I have no idea how long it took them to come up with the story and hide the gun, but as they sat there trying to cover up what had happened, Michael lay there, on a dirty kitchen floor, bleeding from his chest and mouth.

When they finally called 911, the caller said, very nonchalantly, “My homeboy’s been shot. Someone broke into the house and shot him.” Because it was a crime scene, the paramedics were not allowed in to help Michael. The police had to secure the scene.

Michael was taken to the trauma ICU at St. Joseph’s hospital where he was placed on life support.  On the fourth day, the doctors started doing brain activity tests on Michael. He was pronounced brain dead at 3:13 p.m. on August 21, 2004. I worked with the Donor Network of Arizona to donate all of Michael’s organs, tissue, bones, corneas, skin — everything viable was donated to help save or improve the lives of more than 75 people.


Mari had to try and make sense of Michael’s death. She researched how to prevent gun violence and came across the National Million Mom March website. Mari wanted to stop another family from experiencing what She had experienced. Mari started the Greater Phoenix Million Mom March chapter a year after Michael was killed.
Anyone who knows Mari knows that she misses her son very much:

It definitely does not get easier. Though it has become easier to keep my feelings bottled up so I can, somehow, cope, day-in and day-out, the pain never goes away. Some days, the pain is so unbearable, you feel like it will kill you. If you are lucky — with a lot of time and grief work — the pain will become more gentle and that’s the best you can ever hope for.