It's Not About Self-Defense--It's About Posing 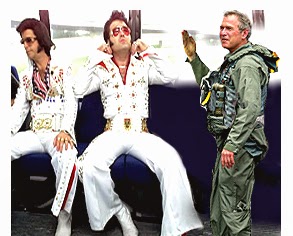 We've all seen it.

Open carry is no different.  It's a way for society's losers to self-proclaim they deserve your fear, awe, and respect because they were man enough to shell out a couple hundred bucks and lug a gun around town.

It ain't about self-defense.

A Gresham, Oregon open carry enthusiast was robbed of his weapon on Saturday by another man with a gun.

According to KOIN Channel 6, 21-year-old William Coleman III of Gresham was standing and talking to his cousin shortly after 2:00 a.m. on Saturday when another man approached him and asked for a cigarette.

The other man — described as a black male around 6 feet tall with a lean build and wavy hair — asked Coleman about his weapon, a Walther P22 pistol.

He then pulled a pistol from the waistband of his pants, pointed it at Coleman and said, “I like your gun. Give it to me.”
Posted by Jadegold at 4:36 PM