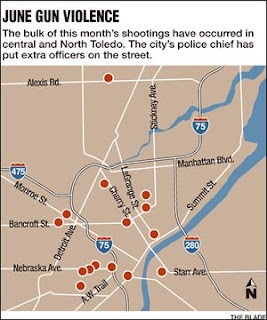 The Toledo Blade reports on the terrible frequency of gun violence in their city.

You know how the gun-rights folks will often accuse their opponents of what they know they themselves are guilty of? Well, here's what I thought. Let's take a wild guess and say that central and North Toledo is where the black people live. Let's combine that fact with what we know about lawful gun ownership. Guns are manufactured by companies owned by white folks (is there even one exception?), they are distributed to Federal Firearms Licensees (not too many blacks there, eh?), then the free-for-all begins.

Lax gun laws in places like Ohio facilitate the gun flow from the predominantly white beginnings of gun ownership out into the world, including all those that end up in central and North Toledo.

The entire system is racist.  Blacks end up paying for the sins of whites. I know the argument that each ghetto shooter is solely responsible for his actions, but I don't buy it.  Most ghetto shooters are suffering from economic and educational disadvantages, many times drug and alcohol addiction is involved.  The folks who ensure a steady supply of guns are also to blame.

Meanwhile, the gun-rights extremists will go to great lengths to argue that gun control is racist.  It started out that way 150 years ago, after all.

What's your opinion?
Posted by Unknown at 6:06 AM