Background Checks for All Gun Sales 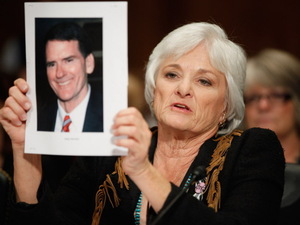 Patricia Maisch, one of the people who helped halt the Tucson shooting , holds up a photograph of victim John Roll, a federal judge, while testifying before a Senate subcommittee on Tuesday. Maisch testified in support of legislation that would strengthen federal power over the states' handling of background checks.
Supporters of the legislation want to keep guns out of the hands of more criminals, domestic abusers and people who are mentally ill. They say that might have made a difference last January, when a gunman in Tucson, Ariz., killed six people and wounded 13 others, including U.S. Rep. Gabrielle Giffords. Jared Loughner, who has been charged in the shooting, is being treated after he was found not mentally competent to stand trial.

Is the reluctance on the part of pro-gun folks to come on board with this due to the fact that in order to make universal background checks effective, registration and licensing would be the logical next steps?

Requiring background checks on every sale would greatly improve the current situation because many lawful gun owners unknowingly and innocently allow their guns to flow into the criminal world. This would cease.  Being law-abiding folks, these gun sellers would comply with the law and require background checks before selling.

Some gun sellers, whom I like to call "hidden criminals" are staying within the letter of the law, but for personal gain or apathy, they're knowingly allowing guns to go to criminals. These activities may not be prevented by a law requiring background checks but such a law will force these hidden criminals to come out in the open. Under the new law, anyone selling a gun without a background check is engaging in criminal activity.

So, although much improvement can be expexted from this background check law itself, only when it's combined with registration and licensing will it have maximum effectiveness. Straw purchasing will be eradicated and gun flow into the black market will be drastically curtailed.

What's your opinion? Please leave a comment.
Posted by Unknown at 8:32 AM