More on the Sikh Murders 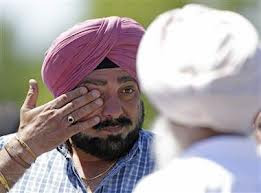 
Tattoos on the body of the slain Sikh temple gunman and certain biographical details led theFBI to treat the attack at a Milwaukee-area temple as an act of domestic terrorism, officials said Sunday.

The designation of “domestic terrorism” under the FBI’s rubric — which was not applied to the Aurora, Colo., theater shooting — implies a political agenda. The FBI defines terrorism as “the unlawful use of force or violence against persons or property to intimidate or coerce a government, the civilian population, or any segment thereof, in furtherance of political or social objectives.”

I know, there are 100 million gun owners and the Sikh-hating mass murderers are extremely rare. Isn't that the pro-gun rationale?

And, of course, if he hadn't owned any guns, he could have killed them with a jeweled ceremonial dagger.  The gun was just a tool.

What else, oh yeah, he was stopped by someone with a gun.  It could have been much worse.

I'm sure we'll see those excuses and others, anything to divert us from the fact that too many unfit people have guns and not enough is being done about that.

What's your opinion?  Please leave a comment.
Posted by Unknown at 8:54 AM