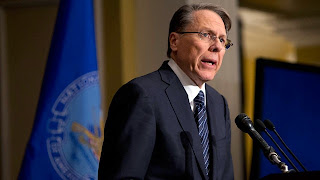 
The National Rifle Association has come under fire by an association of psychiatrists for its characterization of people who commit violent crimes as "monsters," "lunatics" and "insane."

"One of the things that may be especially distressing for individuals who have a mental health condition and their families is this automatic leap based on stereotyped perceptions linking mental illness and violence," Corolla [Bob Carolla, a spokesman for the National Alliance on Mental Illness] said. "Statistically we know the relationship is very small."

According to Corolla, one in four American adults experience a mental health problem in any given year, yet the U.S. Surgeon General determined over a decade ago that the overall contribution of mental disorders to the total level of violence in society is exceptionally small. He added that people with mental disorders are far more likely to be the victims of crimes, rather than the perpetrators.

The gun-rights folks often call people who break into houses and commit other crimes "goblins." This de-humanizing of the criminal is very useful in justifying an extreme response. In a similar way, Wayne La Pierre referred to the mass shooters as monsters in his famous statement the other day.

What's your opinion?  Is that wrong?  Is it politically incorrect to refer to the mentally ill like that?  Does it matter?

Please leave a comment.
Posted by Unknown at 9:53 AM