Should Piers Morgan be Deported? 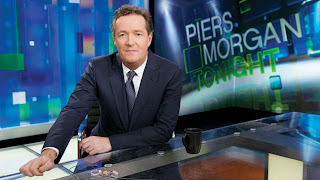 
Thousands of gun rights supporters are petitioning the Obama administration to consider deporting CNN’s Piers Morgan, arguing the gun control proponent is using his position as a TV news host to wage war on the Second Amendment.

“British Citizen and CNN television host Piers Morgan is engaged in a hostile attack against the U.S. Constitution by targeting the Second Amendment,” reads the petition. “We demand that Mr. Morgan be deported immediately for his effort to undermine the Bill of Rights and for exploiting his position as a national network television host to stage attacks against the rights of American citizens.”

If they had any idea how foolish they are, they'd just keep their crazy ideas to themselves. What this shows is the very-common response on the part of pro-gun folks to disagreement.  They try to silence the offending voice in one way or another.

I actually didn't hear Piers Morgan call for a repeal of the 2nd Amendment.  I thought his whole thing was about the assault weapons.  But it doesn't matter to the biased and paranoid gun-rights fanatics.

We're going to see a lot more of these bizarre reactions from them.  The tide has turned and they don't like it one bit.

What's your opinion?  Please leave a comment.
Posted by Unknown at 11:22 AM