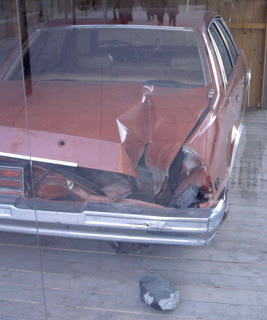 Naturally, Wikipedia has the explanation.

One of our frequent commenters, Bob S., who runs a very interesting pro-gun blog by the way, has gone to great lengths to explain why he carries a gun. When I asked him if he'd had to use it lately to save himself or his family, he said no he hadn't, but it's better to be prepared just in case. To that I asked why he doesn't prepare in a similar way for that occasional meteorite. If a tiny meteorite ever lands on his head, I'd bet he'd wish he'd worn some kind of protective head gear.

The following is what all responsible men should know, if they want to protect themselves and their families that is.

The biggest asteroid to hit Earth on any given day is likely to be about 40 centimeters, in a given year about 4 meters, and in a given century about 20 meters. These statistics are obtained by the following:

Over at least the range from 5 centimeters (2 inches) to roughly 300 meters (1,000 feet), the rate at which Earth receives meteors obeys a power-law distribution (meaning there is no typical size in the conventional sense) as follows:

where N(>D) is the expected number of objects larger than a diameter of D meters to hit Earth in a year.

This is based on observations of bright meteors seen from the ground and space, combined with surveys of near Earth asteroids. Above 300 meters in diameter, the predicted rate is somewhat higher, with a two-kilometer asteroid (one million->megaton TNT equivalent) every couple of million years — about 10 times as often as the power-law extrapolation would predict.

What's your opinion? Is it fair to compare the probability of needing a gun to save your life to the chance of being struck by a meteorite? Have you ever seen a picture of the surface of the moon?

I make this comparison only partly in jest. The point is both are so unlikely that reasonable people don't take any extraordinary precautions.

What's your opinion? Please leave a comment.
Posted by Unknown at 2:53 PM