Etiquette Question--Is it polite to carry a concealed firearm when you are a guest?

My wife and I had some dinner guests over last night and the discussion turned toward the crime in a nearby big city, in particular the flash mobs beating up people. The male guest announced that he had a pistol on his person. 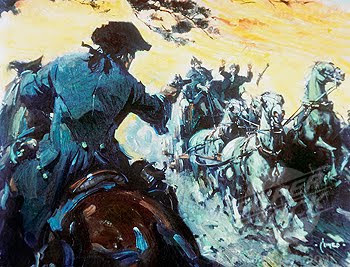 We do not live anywhere near the big city and are in a low crime area. Footpads and highway robbers are a thing of the far distant past in this area (if they ever existed). I might have wanted to pound this person to a pulp for having brought a firearm into our house, but we posed no threat otherwise to this person.

Besides, since this was a dinner party, we could have poisoned them. In that case, will this person bring a food taster in future visits?

Even worse, the gun toting guest his gun by pulling it out. The gun toting guest had his finger on the trigger as he pulled the gun out of the holster. This scared my wife who thought she would be treated to a negligent discharge ricocheting off the marble countertop.

Is this acceptable behaviour?

In ancient times, concealed weapons were carried by sneaks and assassins. In short, people who were not to be trusted. Unfortunately, there is a growing trend for people to carry concealed firearms without proper training. This is a sad commentary on modern society.

The fact that the guest unholstered his weapon with his finger on the trigger demonstrates that he is one of the great unwashed who really SHOULD NOT be carrying a firearm, either concealed or openly.

You should feel offended that your guest did not feel safe enough to visit you without a weapon. The fact that he came armed to your house demonstrates a very sick mindset. That is that deep down he is distrustful of you and your husband. Perhaps rightly so of your husband, but your husband was correct to be indignant at this behaviour.

Likewise, the fact that footpads and highway robbers are non-existent in your area shows that your guest is deeply fearful person: perhaps pathologically so. He was unlikely to encounter these types of miscreants on the way to your house which means his need was purely psychological. Even if footpads and highway robbers were active in your area,the fact that he entered armed into your house sends a seriously disturbing message about his deep down feelings toward you and your husband.

If anything,you may wish to either arm yourselves,or just not bother inviting this person to your house in future. The fact that he feels the need for a deadly weapon in your presence shows that he is probably not someone you should truly consider a friend.

In future, tell them to check the weapon at the door or just not come over if they value your friendship.
Posted by Laci The Dog at 4:15 PM