A Sad Day for Virginia 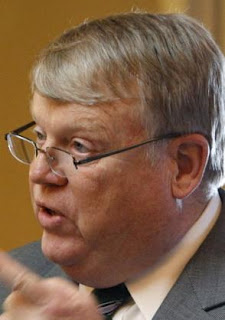 The House of Delegates is expected today to approve repealing the state's one-handgun-a-month law, with the state Senate likely to follow suit Thursday.
After significant debate Tuesday, legislation that would do away with the law — House Bill 940, carried by Del. L. Scott Lingamfelter, R-Prince William — advanced to its final reading on a voice vote.

Whenever I hear a politician arguing for gun rights I wonder if he's only doing it for the votes. I mean, in Virginia, it's popular to do that. Do you think Lingamfelter would be pushing the same thing if he were from New York or New Jersey?

"We were the gun-running capital of the nation," he said. "Let's be serious — is one gun a month really an undue burden?"
Lingamfelter said the law now merely inconveniences law-abiding gun collectors, noting that federal law already prohibits the transfer of guns across state lines and adding that nothing prevents criminals from acquiring guns in "back alleys and through theft."

Of course, the good Delegate didn't mention that soon, in addition to limiting the bad guys to picking up guns in the "back alleys and through theft," the straw purchasing business will flourish again in the Old Dominion.

This is freedom. This is America.
Posted by Unknown at 7:32 AM