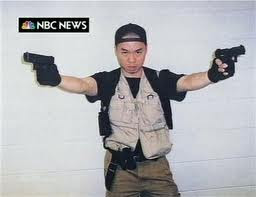 A poll of attitudes towards gun laws, conducted by the respected Lake Research Partners of Virginia Senate Districts 21 and 38 (southwestern Virginia; John Edwards' and Phil Puckett's districts), is being released this morning. I received an advance copy of the polling memo, which you can view in its entirety here. A few highlights.
1. "[S]trong majorities of voters oppose ending the state's one handgun a month law, allowing guns on campuses, and allowing any person to carry a concealed and loaded gun without a permit or background check."
2. "Voters in both districts want to make gun laws stronger, not less restrictive."
3. "Voters strongly endorse requiring background checks for people purchasing guns and permits for people who want to carry a concealed loaded weapon."
4. "Nine in ten voters in both districts oppose a suggested change that would allow any person to carry a concealed and loaded gun in public places without a permit or background check."
5. "More than seven in ten voters in both districts oppose allowing students, faculty, and staff at Virginia's state colleges and universities to carry concealed and loaded guns on campus."
6. "More than six in ten voters oppose changing Virginia's law that currently restricts handgun purchases to one a month."
Perhaps most impressive - even stunning - is that gun owners in generally conservative, southwestern Virginia (note that there are also significant urban areas in Sen. Edwards' district along with rural and suburban areas) hold very similar attitudes to non-gun owners. For instance, only about 37% of gun owners, and about 26% of non-gun owners, in the 21st and 38th Senate districts support changing Virginia law to allow people to purchase more than one handgun a month. With regard to allowing guns on college campuses, just 24% of non-gun owners support that, and also just 30% of gun owners. Finally, 94% of gun owners, and 95% of non-gun owners, in the 21st and 38th Senate districts believe that "anyone who buys a gun should be required to have a background check done."
Bottom line: even in two districts of generally-seen-as-"pro-gun" southwestern Virginia, and even among gun owners living in those districts, there is little support for weakening Virginia's gun laws, and far more support for keeping them the same or strengthening them. Which raises the question: why are members of the Virginia General Assembly voting against the wishes of a strong, even overwhelming, majority of their constituents? Think about that one for a minute.