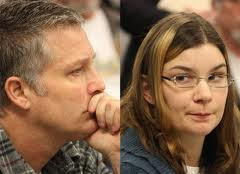 Bauer and Chaffin
Reuters has the follow-up to this story which we covered before.

[the mother Jamie] Chaffin, already a convicted felon barred from carrying a gun, pleaded guilty to two felony counts of unlawful possession of a firearm and agreed in turn to testify against her boyfriend, Douglas Bauer.

An assault charge against Chaffin was dismissed as part of her plea deal, but she faces 12 to 16 months in prison when sentenced following Bauer's trial, now scheduled for July.

Bauer remains charged with felony third-degree assault for what prosecutors say was his role in negligently allowing the boy access to his gun. If convicted, he faces up to five years in prison, said Kitsap County Deputy Prosecutor Jeremy Morris.

An attorney for relatives of the wounded girl said the family was upset by the outcome of the mother's plea deal.

"Their disappointment was based on the fact that the assault charge ... was dismissed and the person who bore responsibility for the shooting of their child was absolved of that responsibility by the plea bargain," lawyer Jeffery Campiche said. "The crime, as the Bowman family sees it, was the horror of the discharge of a handgun in an elementary school classroom, not the fact that a felon possessed a handgun."

That's exactly right, the fact that the gun was owned by felons should not be the determining factor. The fact that a kid got ahold of it should be the thing. What's your opinion? Please leave a comment.
Posted by Unknown at 7:45 AM