The Truth about Australia's Gun Laws 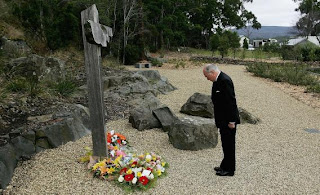 
At the heart of the push was a massive buyback of more than 600,000 semi-automatic shotguns and rifles, or about one-fifth of all firearms in circulation in Australia. The country’s new gun laws prohibited private sales, required that all weapons be individually registered to their owners, and required that gun buyers present a “genuine reason” for needing each weapon at the time of the purchase. (Self-defense did not count.) In the wake of the tragedy, polls showed public support for these measures at upwards of 90 percent.

What happened next has been the subject of several academic studies. Violent crime and gun-related deaths did not come to an end in Australia, of course. But as the Washington Post’s Wonkblog pointed out in August, homicides by firearm plunged 59 percent between 1995 and 2006, with no corresponding increase in non-firearm-related homicides. The drop in suicides by gun was even steeper: 65 percent. Studies found a close correlation between the sharp declines and the gun buybacks. Robberies involving a firearm also dropped significantly. Meanwhile, home invasions did not increase, contrary to fears that firearm ownership is needed to deter such crimes. But here’s the most stunning statistic. In the decade before the Port Arthur massacre, there had been 11 mass shootings in the country. There hasn’t been a single one in Australia since.


I wish I had an Australian Dollar for every time I read a lie about the results of the Australian gun laws. Similar to the lies often repeated about England, in Australia, according to the gun-rights fanatics, violence is rampant AS A RESULT of the strict gun laws.

It's become quite clear that the pro-gun folks are seriously lacking in honesty and integrity.  Their monomaniac interest is the elimination of gun restrictions, in spite of everything. And they'll do or say anything to achieve that goal.

The fact seems to be that gun-rights advocates don't care if proper gun control would work in the US as it has in other countries.  The unforgivable part is that most of them are law-abiding and responsible enough to continue to enjoy their guns even under the strictest imaginable gun control regimen.

What's your opinion?  Please leave a comment.
Posted by Unknown at 8:31 AM