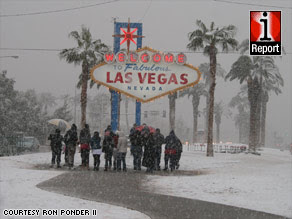 CNN reports on a rare snow storm that hit Las Vegas. It reminds me of a day in about 1978, perhaps the last time it snowed there which the article refers to. I was playing cards during the afternoon in a small casino on the Strip. There was a window facing the street through which fluffy snowfall could be seen, white and beautiful. As the afternoon passed, and my chips slowly disappeared, the snow lent a dream-like effect to the scene. Driving home in the early evening I saw groups of adults, threes and fours of them, out playing in the snow like children. There were snowball fights, people running and sliding on the sidewalks. Some must have been transplants from the Northeast reliving their childhood. Others were natives who'd never seen snow in their lives. A rich memory it is.
Posted by Unknown at 7:30 AM