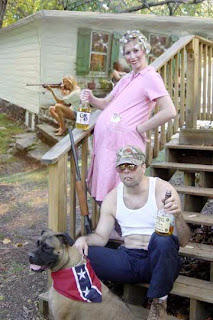 In Part 3 of this series, I outlined the strategy. Here come the tactics.
1. Deny gunloons what they most desire. Guns? Nope. Acceptance. What gunloons really want more than anything is an acceptance of their gunloonery as 'normal' or mainstream. It's not and it's easy enough to show this. Tactic: go to gun shows and events--show what's going on there. Here's a sample.
In the past, the Brady Campaign, VPC, etc. have been good about posting transcripts of lunatic gunloon craziness--but pictures convey the message that words can't.
2. More stings. Gunloons hate this. And the media loves undercover investigations.
3. Ridicule is your friend. Too often, the BC and VPC get too preachy; gun violence is a serious issue. But you can influence public opinion with facts and ridicule. See tactic 1, gunloons provide an extremely rich environment for ridicule.
4. Target specific audiences. It's all well and good to create an ad that says 30,000 Americans will die from guns this year. It's far better to pinpoint a demographic and pursue it. Example: target soccer moms. How? Note the NRA wants guns on campus. Believe me, mom and dad are nervous enough about little Johnny or little Mary going off to college with its drinking, drugs, sex and all sorts of dangers--do you think they'd want to add guns to that mix?
5. Put the profit(or non-profit)in gun control. Push for legislation requiring gun owners have gun insurance. Do you think the insurance industry might be interested in this market? You bet they would. If you're quesy about insurance company profits--how about legislating insurance company profits, all or some, go to something like scholarships for the kids of police officers killed in the line of duty or the like?
....To Be Continued....
Posted by Jadegold at 12:22 AM