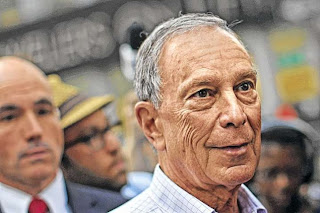 Across the country, more than 80% of gun owners support simple fixes to the background check system that would help stop the flow of guns to criminals. The ideologues who run the gun lobby don’t want us to know that, but it’s true.
Americans of both parties support common-sense steps that would save lives and protect our police. But the gun lobby doesn’t, and it has scared Washington silent.

This is the most unconscionable part of the pro-gun resistance. What used to be called "the gun show loophole," and is probably better referred to as "the private sale loophole," is only part of it. Bloomberg's plan is not only to require background checks on all gun transfers but to ensure that the data base which is used in those checks is more reliable.

Incomplete reporting to the national data base especially regarding mental health cases is sorely in need of repair. Even, in many cases, misdemeanor domestic abuse and felony convictions are not entered in a timely manner.

This is the first of the three weaknesses in the system which needs to be corrected, the other two being straw purchasing and theft.

Everyone agrees criminals should not have guns. This is one way to do something about it.

What's your opinion? Please leave a comment.
Posted by Unknown at 8:07 AM